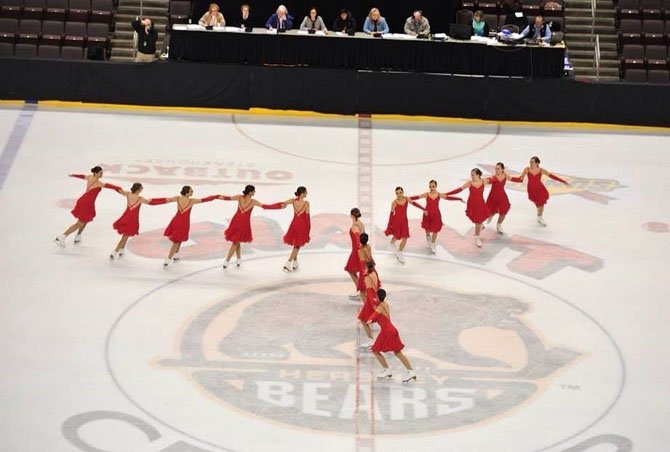 The team performs a wheel element in front of the Pennsylvania judges. Photo Courtesy of Jerothe Photography

Vienna’s Ceci Picard isn’t an Olympian, but she is an accomplished ice skater. And on Feb. 27, she and her teammates will compete in the Synchronized Skating National Competition in Colorado Springs.

The Madison High freshman is one of five girls from Fairfax County on the 15-member Team Ashburn. They skate at the Intermediate Level – the U.S. Figure Skating Assn.’s most competitive level. And this is the first time an Intermediate team from the Washington Metropolitan area has made Nationals.

"I am so excited," said Picard, 15. "We want to go out there and show them what we’ve got. We’ve made a name for ourselves within the skating community, but never had a team that competed well enough to qualify for Nationals until this season."

AS A SOLO ICE DANCER, she’s made Nationals twice, but synchronized skating is completely different. Skating since age 7, Picard practices with her team eight hours each weekend, and before or after school on weekdays.

"I like gliding across the ice," she said. "The feeling of the blade on the ice is just so cool. I never wanted to do jumps – they scared me. In synchro, we all have the exact same goal. The other teams in our organization cheer for us in the stands, and we’re like role models for the younger skaters. I also help coach a team for ages 7-9."

In synchronized skating, team members skate to music in unison while demonstrating their teamwork, speed and ability to perform intricate formations and challenging step sequences. Comprised of girls ages 13-18, this Intermediate-level team is the top group at Ashburn. To compete on it, members typically have more than six years skating experience and have passed various tests set by U.S. Figure Skating.

Picard likes being part of a team because, she explained, "I never liked being out there skating all by myself. There’s a lot of pressure on individuals; if you mess up, it’s all on you. But if something goes wrong in synchro, we can compensate for it because there are 14 other girls skating around you. And it’s like a family – we all support each other and do everything together."

Regarding Nationals, she said, "I knew that if we ever made it, this would be the year, because this team just works so hard and meshes so well together. We’ve been really dedicated since we got our team choreography in June."

The season goes from June-February, but competitions began in November. Team Ashburn competed in three Massachusetts venues, but it was a Jan. 31 competition in Hershey, Pa., that sent it to Nationals. "We had to watch 10 other teams skate, and then wait for the results – it was awful," said Picard. "When we found out we made it, we were all crying, screaming and hugging each other. It was like a weight lifted from us."

THE TOP FOUR TEAMS from each of the Eastern, Midwest and Pacific sections of the U.S. will vie at Nationals. "We’ll do one routine to a medley from the TV show, ‘So You Think You Can Dance,’" said Picard. "We’ll skate to a swing song, a sway song and Jennifer Lopez’s ‘On the Floor.’"

"I think we can finish in the top of the standings," she said. "But just getting to Nationals is so good for our organization. It makes even more girls want to join it and advance to the Intermediate team."