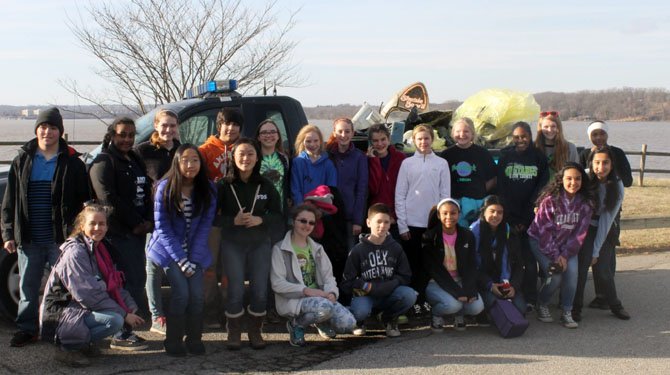 Volunteers from South County Middle School, including many members of Cadet Girl Scout Troop 340 of Lorton, pose in front of the trash they collected at Mason Neck State Park. Photo by Janelle Germanos

After volunteering at Mason Neck State Park during the 2013 Martin Luther King, Jr. Day of Service, Laura Douglas, who leads Cadet Girl Scout Troop 340 in Lorton, had such a great time that she decided it needed to happen again in 2014.

This year, more than 80 students from South County Middle and High Schools, many of whom are Girl Scouts, used their day off from school on Martin Luther King, Jr. Day to volunteer at the park by picking up trash along trails and the shoreline. The event was part of the National Day of Service, a day dedicated to sharing Martin Luther King Jr.’s legacy by volunteering.

“It is a great way to give back,” said Douglas. “It shows the girls the importance of volunteering.”

The Girl Scouts accounted for most of the volunteers, but they brought along their friends as well. In addition to picking up trash, volunteers cleaned kayaks and displays in the park’s visitor center.

“An estimate of more than 60 bags of trash wouldn’t be a longshot,” said David Gunnels, the chief ranger at Mason Neck State Park.

Volunteers like Morgan Greer, an eighth-grader at South County Middle School, enjoyed comparing bizarre trash finds they picked up during the day, as well as spending time with friends.

“I like Girl Scouts because I get to hang out with friends, and I like planning events,” Greer said.

Events like the Day of Service allow Girl Scout Members to bond and interact with others in the community.

“It’s a great way for them to do a group activity while also helping the park,” Douglas said.

Roma Mehta, also an eighth-grader at South County Middle School, helped clean up trash along the shoreline. “I liked making the beach cleaner,” she said.

The park covers 1,814 acres, which Douglas said makes it difficult to clean up all of the trash. “It never ends, but we can’t just let it sit here,” she said.

Activities like these, Douglas said, make Girl Scouts an important activity for young girls. The girls were encouraged to invite at least five friends to volunteer with them.

Vanessa Mitchell, a 17-year-old student at South County High School, and her cousin, 9-year-old Girl Scout Ellie Dunham, joined Douglas along the shoreline in the afternoon, stepping over fallen branches and treading through mud to find trash.