Challenges of a Lean Economy
Votes

Challenges of a Lean Economy

Could a meals tax be the answer to fund the schools? 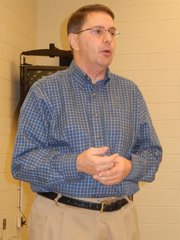 Speaking before the quarterly meeting of the West Fairfax County Citizens Association (WFCCA), he said that, although people see commercial buildings going up in the Westfields Corporate Center, “[local] development is flat.”

COPT (Corporate Office Properties Trust) is constructing three new buildings there, and Frey said the project’s advancing rapidly. “They’re flying — they put steel up in the last week,” he said. “And The Aerospace Corporation is doing interior work on its new building; they should be moving folks in by August.”

So, said Frey, “From a tax-base standpoint, that’s good news.” But overall, he said, except for Tysons Corner, “the growth is on hold. We hope the federal budget adoption will encourage businesses to invest now.”

Regarding the proposed FCPS budget, he said, “The Board of Supervisors doesn’t want to be the bad guy and give the schools less money than they’ve asked for. But they requested a 5.7-percent increase. Over the last couple years, they’ve had to make some pretty substantial cuts.”

Yet with its own revenue down from several years of a tough economy, Fairfax County isn’t exactly flush with money. So it, too, has to make tough decisions about where to spend its precious dollars.

“Until there’s independent taxing authority and school boards can raise their own revenue, this problem will continue,” said Frey. “It’s inherent in the system. We’re one of only two states that don’t have it. The county executive has a 2-percent increase for the school system in his budget, but I hope we can get them more money than that. They’ve grown by over 10,000 students in the last four years.”

He also believes the relationship between the supervisors and School Board is “better now than it has been in several years.” He said Schools Superintendent Karen Garza is “fresh and new and everybody wants to work with her. I’m proud of our schools and we’d like to give them more than 2 percent. The hard part is where do you find it?”

The county executive’s proposed budget comes out in the third week in February. And, said Frey, “We’re going to have a lot of issues to deal with. The board has urged all the county’s agency heads to be creative and do more with less.”

Still, some new expenditures have been unavoidable. For example, with the continued urbanization of Tysons Corner, its police department had to add nine new officers last year and the county opened the Wolftrap Fire Station. Furthermore, said Frey, “Some 900 child Medicaid cases were turned over to the county to manage. It’s not their medical care, but their cases, but we didn’t get a penny to pay for it.”

So, he said, “It’s a challenge to meet all the needs we have. The schools haven’t asked us to put a meals tax on a referendum, and counties can only do it if it’s on a referendum. It failed in spring 1992, but it’s real money. Everybody to the east of us has a 4-percent meals tax, and it would generate $90 million to $100 million a year.”

Frey doesn’t have a position on a meals tax at this point. But given the opportunity, he said, he’d vote to put it on a ballot and leave it up to the voters to decide. However, he added, “I don’t think the votes [for it] are there on the Board of Supervisors.”

Now that Northern Virginia has finally received some transportation dollars, Frey said, “We’re struggling with how to spend it efficiently and quickly. In the ’90s, we had road projects moving along in various stages of design, land acquisition and construction. But as the money dried up, it made no sense to design projects, so they were taken off the table.”

Locally, the I-66/Route 28 interchange remains his biggest priority. “We’ll continue to push it,” he said. “VDOT’s working on two conceptual designs, and I suspect we’ll have another public meeting later this year when there are more details.”

But the project is still three to four years away from fruition, said Frey. “It’ll be hard to do without impinging on parkland, and it’s also a federal highway,” he said. “About 55 million has been approved to do the design and land acquisition and start construction. But the cost estimate ranges from $75 million to $125 million, so it needs more money from the state.”

Some smaller projects, though, are already underway. Frey noted that the Route 29 bridge replacement over the Little Rocky Run stream in Centreville began recently. The new bridge will have six lanes and should be done by October 2015. The project also includes a new sidewalk and shared-use path.

In addition, also under construction this year will be a new, four-lane bridge with bike lanes to replace the existing Walney Road Bridge over Flatlick Branch.

Now that VDOT’s gotten the go-ahead to build a roundabout at the Pleasant Valley/Braddock road intersection in Centreville, Virginia Run’s Ted Troscianecki asked Frey what will be done to fix the dangerous S-curve just east of Braddock.

“VDOT will try to add as much as they can to the road width at the S-curve,” replied Frey. “[VDOT’s] Bud Siegel will try to use maintenance money to build up the shoulders. But there’s only so much you can do with that curve because it’s all rock.”

While noting that “we have secondary roads carrying more traffic than most primary roads in the state,” Frey said no more secondary-roads money is anticipated until 2017.

“So let’s plan some road initiatives so we’ll be ready to do these projects when a pot of money does become available,” said Troscianecki. “And we need to make sure to get the community’s input and involvement at the dawn of these projects, rather than at the twilight.” He also said Fairfax County has to develop a six-year plan for secondary roads.

“We’ve identified road projects needing approval, but there’s no money for them,” answered Frey. Troscianecki then said he’d like there to be a Sully District meeting about local transportation projects.

Frey said the creation of a transportation-projects list for Sully is fine with him, and he suggested that Sully Transportation Commissioner Jeff Parnes be involved, too. Furthermore, said Frey, “Sully should also learn from the county DOT what other transportation projects there are in the county and how they all fit together.”