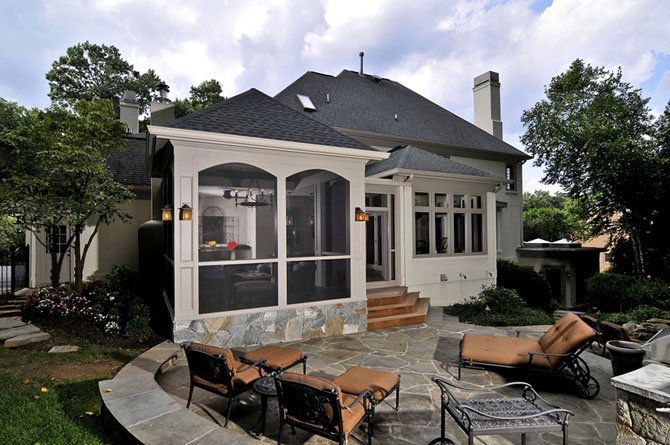 A screen porch addition by Sun Design Remodeling was recently named the nation's best-in-category by the National Association of the Remodeling Industry. The exterior integrates a Mediterranean style home with mature landscaping and a well-developed outdoor activities area. Photo by Bryan Burris Photography

A spacious screen porch addition to a Mediterranean-style home in Vienna has won a national Contractor of the Year Award for Sun Design Remodeling. The indoor/outdoor solution was judged the nation's best residential addition by the National Association of the Remodeling Industry at an awards ceremony held in New Orleans this past spring.

The custom-designed addition to the home's rear elevation integrates a nearly 4,000-square-foot house with mature landscaping that includes flowering shrubs, garden pathways and a fully-stocked koi pond. The project boasts a Tuscan-style interior design that incorporates a wood-fired pizza oven.

Sun Design founder and chairman Craig Durosko described the addition as consistent with the kind of distinctive indoor/outdoor solutions homeowners have been seeking in recent years:

With its proportional scale, the new addition enhances an intricate landscaping scheme.

“There's a real demand for designs that marry the house and its setting,” Durosko said. “A screened porch can become a de facto outdoor room —the place where friends and family gather from early spring until well into the fall.”

Sun Design's recent award-winner was initially conceived as a rear elevation addition that would replace a small deck outside the existing breakfast room. After looking at the plans for a while the homeowner decided a porch would be a more useful solution. Still, Dawn Parker, the project's design manager, made use of the earlier plan, incorporating exterior trim detailing into the new porch.

“Architectural appropriateness is always critical in an improvement of this caliber,” Parker said. “We decided early on that the best way to rationalize the re-made exterior elevation was to match the pyramid-shaped roof over the breakfast room. By contrast, the entrance from porch to patio was designed as a hyphen between two clearly defined enclosed spaces. This approach enabled us to avoid too much massing on the rear of the house, and to keep the scale accessible and comfortable. Overall, the new exterior presents a very appealing rhythm.”

To further join house and garden, Parker's porch design calls for a ground level course of local quarry stone that matches those used in the existing patio.

Taken as a whole, the owner's wishes concentrated on several specifics: a bug-free family outdoor play area near the existing patio barbecue; generous zones for dining, cooking and conversation; open views to the well-developed koi pond and backyard landscaping beyond.

“Given the emphasis on sightlines, one of my early decisions was to bring the footprint for the new porch further into the backyard so that the pond would be a focal point from the sitting area,” said Parker. “That said, the porch is much more the result of specific ‘use’ requirements than a traditional L-shaped wraparound porch would have allowed.”

The 144-square-foot conversation area, for instance, is situated below a tray ceiling accentuated in old wood that outlines the pyramid-shaped roof overhead. A wrought iron chandelier dangles down from the center of a perfect square. The decorative touch reinforces the sense that the seating area is a separate pavilion within the bigger picture.

“Our goal was to create psychologically private spaces dispersed within an open and airy whole,” Parker said.

By extension, the 9-foot-by-12-foot dining area — which now includes a wooden table and two benches under a pair of pendant lights — is both convenient to food preparation options and safely removed from foot traffic.

The room's piece d' resistance, however, is the 825-pound wood-fired pizza oven situated on the western elevation. Made in California, the oven was delivered in large clay sections. To prepare the site, Parker and team had to first design and build a concrete masonry foundation with a footer that is some two feet below grade. All additional porch floor framing extends out from the oven's necessary undergirding.

The oven also required a chimney which rises 15 feet on the outside wall and, in accordance with local code, is at least 10 feet from the nearest peak.

“It gets pretty technical,” Parker said. “But this is a one of a kind feature that really suits the neo-Tuscan interior design and — more importantly — it's a great source of family fun.”