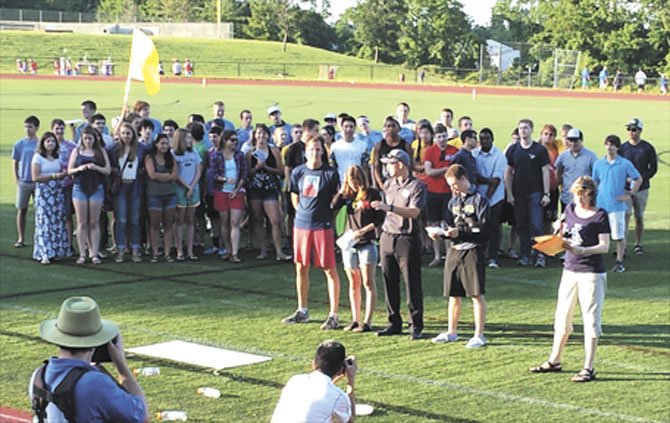 Former Commissioner of the Youth Ultimate Frisbee League of Arlington Deborah Duffy, far right in the front, presents the “Connect with Kids Champions” award from the Arlington Partnership for Children, Youth and Families to Ultimate Frisbee coaches Dave Soles, front left, and Will Smolinski, front center. Standing with Soles and Smolinski are Jay Boyle, second from right in the front, and Jojo Emerson, second from the left in the front, former players for the Yorktown-HB (YHB) Ultimate team. Standing behind them are current and former players from Yorktown and H-B Woodlawn. John Whitesides

Arlington — Several dozen people gathered at Catholic University of America last month to witness two Arlington Ultimate Frisbee coaches, Will Smolinski and Dave Soles, being recognized for their work with the sport during the

Jay Boyle, far right, a former player for the Yorktown-HB team, speaking about Will Smolinski, second from the right. Jojo Emerson, second from the left, another former YHB player, spoke about Dave Soles, far left.

Major League Ultimate game between the DC Current and the New York Rumble. Soles, a Washington-Lee High School math teacher, and Smolinski, a PE teacher at Williamsburg Middle School, were given the “Connect with Kids Champion” award on June 14 from the Arlington Partnership for Children, Youth and Families.

The two men were recognized “for their work creating and building a youth Ultimate Frisbee program that not only is one of the most successful Ultimate programs in the country but also a strong, supportive community for hundreds of high school students,” according to an email from Deborah Duffy, the former Commissioner of the Youth Ultimate Frisbee League of Arlington who presented the two coaches with their awards.

Soles said that when he started coaching Ultimate Frisbee around 1999, Yorktown-HB was originally Yorktown High School and H-B Woodlawn students playing informally and they weren’t competing in any official leagues or playing games against other schools. In 2001, YHB started playing in the Washington Area Frisbee Club league and started competing in regional and national tournaments the following year. Smolinski joined YHB in 2004.

The program witnessed much progress since its early days. In 2011, YHB had three boys’ teams and three girls’ teams for a combined total of 118 people, its highest number ever.

The girls’ varsity won every state championship since 2005 and the boys’ varsity team won it six times in that same period.

In 2012, YHB splint into separate teams for their respective schools under the Youth Ultimate Frisbee League of Arlington. W-L joined the organization in 2013 and Soles hopes to get Wakefield to join in the future.

The official nomination of Smolinski and Soles for “Connect with Kids Champions” award said that “While many coach the talented, Dave and Will seek out kids who aren’t the most athletic or the most talented and those who seem ‘lost.’ Many of their players who otherwise would have drifted through high school, not feeling connected or motivated to push themselves to their potential. Dave and Will give kids a place not only to have fun but also to shine, and they offer the unconditional acceptance guidance and patience to make that happen.”

“Although it’s tempting to look for great athletes and try to get those really good kids to play Frisbee, a lot of what we are trying to do is to get everybody active” and give kids a sport that “they can do for the rest of their lives” said Soles.

To Soles, “most sports are a continually narrowing pyramid — every year there’s less and less people playing them.” Many youths, for example, play soccer when they’re young. However, as they get older some feel that they’re not skilled enough to play, especially when it comes to school teams, and stop playing all together.

The contrast with Ultimate, according to Smolinski and Soles, is that most youths don’t get exposed to the sport until middle or high school. As a result, “there’s no head start” in Ultimate, said Smolinski. Soles added that youths get “such a leg up from being a part of our program that when they go to college” they can be accepted to a collegiate Ultimate program.

The two coaches played Ultimate Frisbee in college at Truman State University and William & Mary. Smolinski said that he was attracted to Ultimate Frisbee because it looked very athletic and where the people “were nice and inviting” as well as “competitive like I was competitive but weren't going to let competition ruin our relationship.”

The same environment that Smolinski experienced in college is the same one he and Soles say they offer to the youths they work with. Considering that more than 50 of their current and former players showed up for the ceremony, according to Duffy, the former Youth Ultimate Frisbee League of Arlington commissioner, it seems that the coaches’ work is viewed positively by these youths.

“They instilled the idea of holding of yourself and your team accountable to high standards [and] to not be complacent in being good,” said Max Denney, a Yorktown graduate who played on YHB.

Denney also added that Soles and Smolinski also emphasized being “respectful,” “spirited,” and “supportive,” which “created a very good team dynamic that way.”

Maddy Boyle, currently a rising junior at H-B and plays for the girls’ team there, spoke of how when Soles would teach her and other players new material “he taught us in ways that were fun and made it more interesting to sit around and have a chalk talk.” One of Boyle’s most memorable moments of Soles is one time when he wore a boot cast due to foot injury yet still ran with the youths during practice warm-ups.

Regarding Smolinski, Boyle said that when she played with Williamsburg Ultimate program she was the only girl, but “he made it feel really welcoming.” She added that Smolinski told her and the other Williamsburg players they were ready for more “high-level stuff, he never held back.”