Our readers submitted photos of their adorable pets. 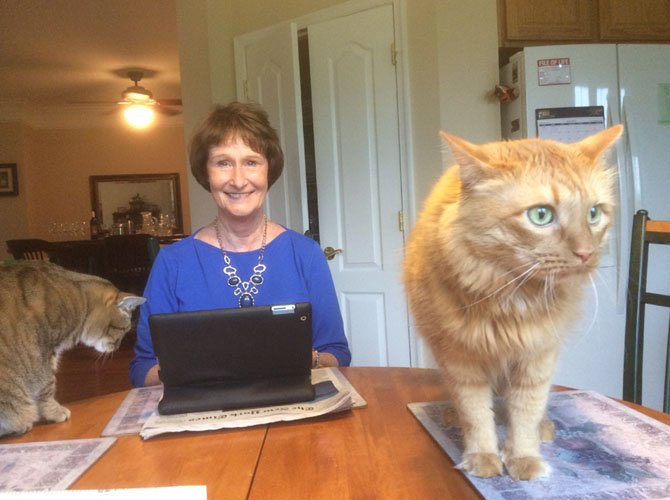 Sharon Bulova with her cats: “Animals add so much to your life!” Photo contributed

Frodo and Sam have become best friends – sort of. My husband and I adopted Frodo from Home Alone Cat Rescue several years ago. He is part Maine Coon and part American Bobtail, with a funny short tail. He may have been mistreated by a previous owner because he is afraid of everything, especially ceiling fans. He quickly became comfortable in our home as an “only cat.”

We adopted “Sam” in September of 2012. She was an adorable tabby kitten, part of a feral litter living outside of a restaurant in Washington D.C. Lee District School Board Member Tammy Kaufax and her two high school aged kids, Halle and Matthew, were fostering the litter as part of a school project. Tammy showed me a photo of the kittens in August of 2012 during the Springfield Bridge Walk and I fell in love with the smallest kitten with tiger markings. As soon as Sam had gained enough weight to be adopted we brought her home as a companion for Frodo.

It took a few weeks for the two cats to get used to each other, but now they play together and chase each other around all the time. They are so cute together, especially when Sam hides behind the bedroom door and ambushes Frodo when he walks into the room. Animals add so much to your life!