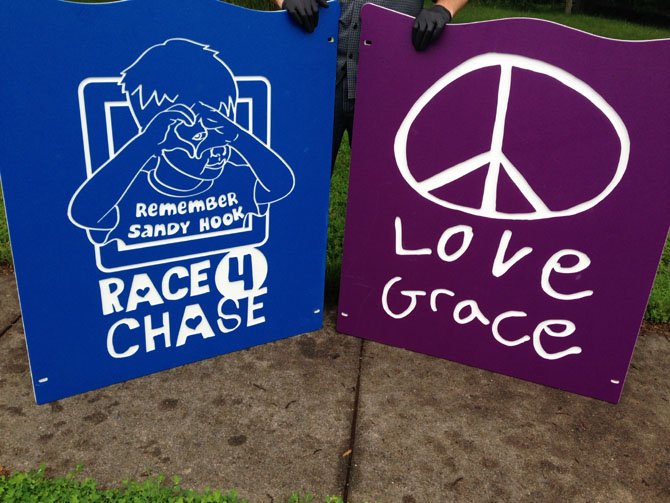 Stolen memorial signs dedicated to victims of the Sandy Hook massacre in 2014 were found in a local man’s room. Photo courtesy of Herndon Police Department

A local man who refers to himself a “truther” is being detained for stealing signs dedicated to Sandy Hook Elementary shooting victims that were placed in Connecticut and New Jersey playgrounds.

Andrew David Truelove, 28, was arrested in a house on the 400th block of Fillmore Street on Saturday, May 30, according to a press release from the Herndon Police Department.

Charges are pending from police departments in Connecticut and New Jersey.

He is currently at the Fairfax County Adult Detention Center.

“It’s hard to explain the ‘why,’ because from our perspective, it doesn’t appear rational, that type of thought process.”

“One memorial sign was stolen from a playground in Mantoloking, N. J. and the other from Mystic, Conn.,” according to the press release. “Both signs were dedications to shooting victims, 7-year-old Chase Kowalski and 7-year-old Grace McDonnell, from Sandy Hook Elementary School.”

Truelove took photos of him sticking his middle finger up at the signs. The “truthers” claim that the massacre of 20 children and six adults on Dec. 14, 2012 was a hoax to implement gun laws.

“It’s hard to explain the ‘why,’ because from our perspective, it doesn’t appear rational, that type of thought process,” said HPD Chief of Police Maggie DeBoard at a press conference. “We know Sandy Hook occurred, obviously. There’s a lot of victims in that case, so I can’t explain the ‘why.’ We do know that [Truelove] has a troubled past.”

Chief DeBoard did not elaborate on Truelove’s criminal background, other than it is “tied to kids,” and he is banned from county school property.