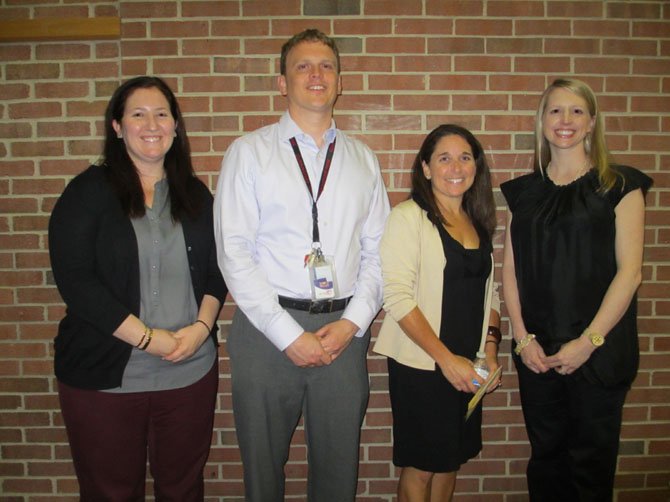 The Vienna Woman’s Club awarded $1,000 scholarships to three local high school seniors going on to college this fall. During the May 21 program at the Vienna Community Center, the Woman’s Club also handed out $500 to each of the Town of Vienna’s four elementary schools for extracurricular programming. 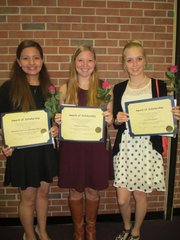 Nathalia Montano Rojas of George C. Marshall High School and Allison Pawlowicz and Julia Rhinehart of Oakton High School each accept a $1,000 scholarship from the Vienna Woman’s Club on May 21.

Allison Pawlowicz and Julia Rhinehart of Oakton High School and Nathalia Montano Rojas of George C. Marshall High accepted scholarship checks and spoke a little about their dreams and goals. The students were supported by their career counselors.

Pawlowicz will be off to the University of North Carolina – Wilmington this fall. She plans on studying 3-D studio art and anatomy. While in high school, she sang with the Madrigals and volunteered with Canine Lifesavers.

Rhinehart has her heart set on being a veterinarian, but she’s a humanitarian at-heart. She spends summers doing Habitat for Humanity projects through her church. Her mom is battling breast cancer for the second time and Rhinehart supports breast cancer research.

Much like Pawlowicz and Rhinehart, Rojas volunteers in the community; she works with special needs youth as a lacrosse coach. Rojas is captain of her school’s lacrosse team. She says she wants to “give back” to her family.

The Vienna Woman’s Club is a civic and service nonprofit club allied with the General Federation of Women's Club and Virginia General Federation of Women's Clubs. The club fundraises, primarily through its annual fall bazaar, to support community programs. Scholarship night has been an annual recognition since the Vienna Woman’s Club’s founding in 1955.

The club meets the third Wednesday of the month, 7 to 9 p.m., from September through May at the Vienna Community Center at 120 Cherry Street, Vienna. For membership information, go to info@viennawomansclub.org.