Guests join in the music. 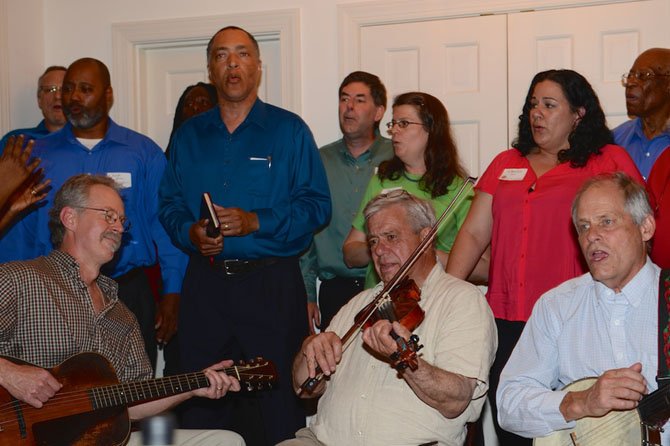 Saturday night, May 10, saw the arrival of a band of spirited musical performers, all from Washington Revels, to Bill and Diana Conway’s Potomac farmhouse residence. More than 60 guests and supporters welcomed the group, lifting their voices in song.

Washington Revels is a cultural institution best known for its annual show performed at Washington D.C.’s Lisner Auditorium in celebration of the winter solstice. The professionally staged production, held in December, draws more than 10,000 attendees. The Revels is dedicated to reviving and celebrating cultural traditions through music, dance, storytelling and ritual. Each year, it chooses a different culture on which to focus, studying the origins of the musical traditions, the rituals and the dance that accompany it. The concert is in effect a holiday celebration, including elaborate pageantry and more than 100 participants, ages 8-85, all performing in the native language as well as English.

For thousands of DC area families, the Revels’ production has become a holiday tradition. Audience participation is a hallmark of the event. Participants get to sing along and even dance in the aisles.

There is more to the Revels, however, than their annual holiday production, and Saturday night’s event provided a venue to introduce some newer aspects of the group. Members of four ensemble groups performed live throughout the evening, popping up at various intervals from among the partygoers to sing songs drawn from old American traditions. As guests drank punch made up from an old American recipe, members of the ensemble Gallery Voices rose to perform an a capella medley of early American hymns and lively folk songs. Heritage Voices, a multicultural ensemble, was next to perform with a medley of songs dating from the Civil War era. The Roustabout String Band, playing banjo, guitar and fiddle, accompanied them.

The Maritime Voices, comprised of six mostly bearded men, performed several sea shanties, or songs that celebrate the sea and sailors. The ensemble members belted out such tavern classics as “Fathom the Bowl” and “Haul Away, Joe.”

Revels board chair and dinner host, Bill Conway welcomed longtime supporters and old friends of the Revels as well as those hearing them for the first time. “We want to show you what this is all about,” said Conway. Quoting from the Latin, “Res Ipsa Loquitur,” he added, “The thing speaks for itself.”

After dinner, the Jubilee Voices, which specialize in African American songs, rose to perform. Arranging themselves in a loose ring as they sang, the group swayed to the music. The melodies drew guests to their feet as they clapped to the beats and tunes of the spirituals, including “Steal Away” and “Old Ship of Zion.” Eighty-four year old James Harkless sang one of the solos. Harkless joined the Revels in 1986, upon being invited by one of the Revels’ members at a Harvard Glee Club reunion.

“The Revels are a community devoted to a celebration of life through music and dance, that’s what it’s all about. We speak the music of peace, joy and love,” he said.

Board member and chorus participant, Pete Behr, explained that the Revels are unusual in that they try to recreate families and communities on stage during their annual holiday production as well as promote a sense of community for its members all year long. For example, during the holiday performance, the entire chorus is organized into “stage families,” consisting of adults, teens and kids of all ages who all perform together. “If you’re in a show, you’ll have a stage husband and kids. The director will say to you ‘go find your mother,’” said Behr. “I’ve had a number of wives in my years with the Revels,” he added with a grin.

Revels’ productions reflect a mix of professional and nonprofessional singers, musicians and actors, all under professional direction. The adult, teen and children choruses — the heart of the Revels — are talented nonprofessionals. To become part of the holiday production, chorus members have to try out every year. “Sometimes you get in and other times, no,” said Behr. “It is very competitive.” Once selected, the atmosphere is fun and congenial, with everyone getting a chance to sing. “It’s a renewal of hope each year when the days are shortest,” Behr said.

Peter Noone, chorus member and grandson of Behr, was serving cocktails at the bar. He elaborated that he first became entranced by the Revels when, at age 5, he heard his grandfather sing in a performance. “The best thing about the Revels is the community-aspect. I and my little brother and sister have been in the chorus now for a number of years,” he said. And, like a number of other Revelers, he met his girlfriend there, too.

Jim Clement, another member who met his wife through the Revels, explained that he was driving in Silver Spring years ago when he saw a sign on a building proclaiming “The Washington Revels.’ He said, to himself, “What the heck?” Years later all four of Clements’s children are involved with Revels’ productions and after-school workshops. Like most Revelers, he got involved in the chorus for the community aspect. “We sing, we dance and we do musicals,” he said. “It’s a lot of fun.”

Washington Revels have been performing in the greater Washington area for 30 years. They are dedicated to reviving and celebrating cultural traditions that have bound communities together over the ages and across the globe. All told, there are now a total of 125 individual events, year round.

“In a world that is increasingly torn apart by differences, the Revels bring things together. It speaks to the heart,” said Conway in closing.

For more information on Washington Revels, their performances and how to get involved, go to www.revelsdc.org.