First medical facility in the nation to have the technology that drastically improves breast cancer detection. 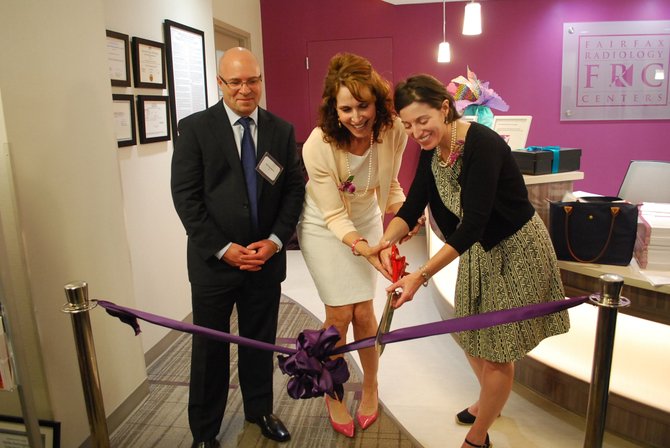 Upon learning she had stage three metastatic breast cancer, Nancy Cappello was shocked, she said.

And as a woman who had never missed her annual mammogram in 11 years, she was even more shocked, the guest speaker and executive director and founder of Are You Dense, Inc., a public charity dedicated to informing the public about dense breast and early detection of breast cancer, told about 75 local physicians and healthcare professionals at the open house of the newly renovated Breast Diagnostic Imaging Center at Fairfax Radiological Consultants Tuesday, June 3.

Marana Coluccio of Fairfax, a sonographer at Fairfax Radiological Consultants, demonstrates how the new Invenia Automated Breast Ultrasound System will be used to help detect breast cancer in its early stages.

But after researching and talking to her doctors, Cappello learned that like 40 percent of American women, she had dense breast tissue. While Cappello’s cancerous cells had been in her body, the mammograms were not creating pictures her doctors could use to properly detect the cells due to the density of her breast tissue, she said.

The Invenia Automated Breast Ultrasound System by GE Healthcare, or ABUS, in conjunction with mammography "can improve cancer detection by more than 30 percent in women who have dense breasts," Berman said.

In a mammogram, dense breast tissue is white, said Marana Coluccio, a sonographer at Fairfax Radiological Consultants. Cancerous tumors are white as well, making it difficult for doctors to see them, she said. "It’s like looking for a white marble on a white carpet."

The ABUS has "one big probe that takes a film of the entire breast tissue," Coluccio said. Traditionally, smaller handheld ultrasound probes were used to target one area, making it easy to miss small tumors, she said.

With the ABUS, cancers are black and dense breast tissue is white, so detection much easier, said Tabatha Fair, a representative of GE Healthcare.