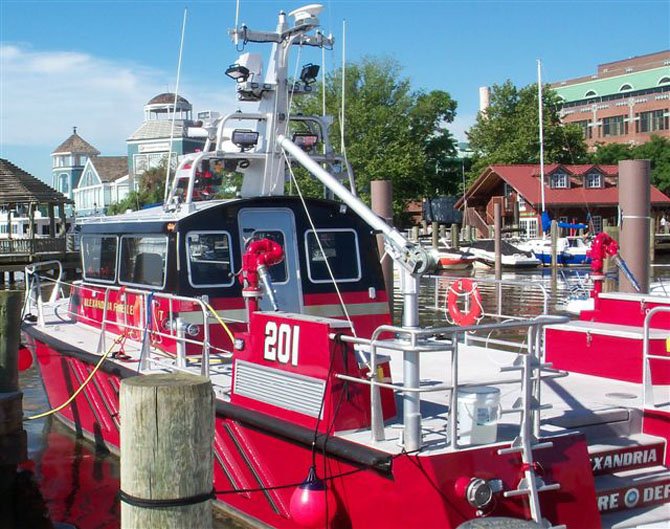 In January of this year, Alexandria’s then-Fire Chief, Adam K. Thiel, announced his resignation to accept high office with the new administration in Richmond. Formal announcement of his many accomplishments included “securing funding for a new fireboat.” On that same day, no fireboat could be found on the local waterfront. She had been returned to the Canadian builder for re-work.

A fireboat is a complex piece of machinery. She is more than “a fire truck without wheels.” Shipbuilders customarily take account of a customer’s special requirements and, not infrequently, produce a one-of-a-kind vessel. The finished product is not simply delivered. She is tested through sea trials, and then monitored for signs that any of myriad parts are not working properly.

So it was with Alexandria’s new fireboat. Delivered in September 2013, a number of “bugs” were detected. Capt. Rodney Masser at Fire Station 201 noted that obtaining spare parts and the services of specialized technicians in the immediate area proved difficult. The practical solution was to return the craft, still under warranty, to the builders who had both the parts and the skills “to do the job right.”

Named Relief, Alexandria’s fireboat returned to its berth last week and stands ready for action in service to the Port City. However, its responsibilities are broader than one might expect. Of course, the boat can pump huge amounts of water to extinguish fires aboard other vessels and in structures along the city’s shoreline.

Additionally, while the old Woodrow Wilson Memorial Bridge was owned by the Federal government, the present structure is owned by Maryland and Virginia. When dividing operating responsibilities, Virginia agreed to “provide water service for any fire protection systems on as much of the bridge as possible.” Relief presently fulfills that promise, but whether and how she will do so in the future is an open question. Susan N. Shaw, P.E., Virginia Department of Transportation, identified a current project aimed at upgrading the bridge’s fire protection system.

If the firefighting water supply to Old Town and its adjacent areas were to fail, Relief has the capability to fill and pressurize the pipes that provide protection to the heart of Alexandria. This occurred a few years ago when Hurricane Isabel hit the area.

Finally, the local area includes the nation’s capital and a major airport. Whether a disaster is man-made or a fit of Mother Nature, Relief is a major asset under mutual-assistance agreements aimed at saving lives and protecting property.

Several factors reveal why Alexandria, alone along Virginia’s Potomac River shore, has a high-performance fireboat in the first place. It has a densely developed waterfront with many commercial and a growing number of pleasure vessels, a large population of residents and visitors, numerous historic buildings and active plans for new high-rises and other new construction projects.

Lt. Sarah Marchegianni, Arlington County Fire Department, confirmed that the county has no fireboat, and no plans to acquire one. Primary responsibility for adjacent river waters falls to the Federal government mainly due to the buffer created by the George Washington Memorial Parkway. However, the county is in the process of establishing a small boat unit that can respond to waterborne search and rescue operations. Fairfax County has a fireboat stationed at Gunston, according to fire department spokesman Dan Schmidt. While used for search and rescue, thinly developed water frontage results in relatively little call for firefighting services, boats excluded. The Fairfax County boat has no role in providing emergency water to Woodrow Wilson Memorial Bridge.

A community large enough for a fireboat usually dedicates permanent staff to the vessel. Alexandria does not. Its boat’s name, Relief, appears in small lettering on the cabin while bold letters declare 201. Actually, “201” is a fire engine parked at 317 Prince St. The explanation is that firefighters assigned to Fire Station 201 also crew the fireboat. Fully trained to work in any firehouse in the city, personnel at this one location receive added, specialized instruction in marine operations. Training is provided in-house, only supplemented by outside experts as required.