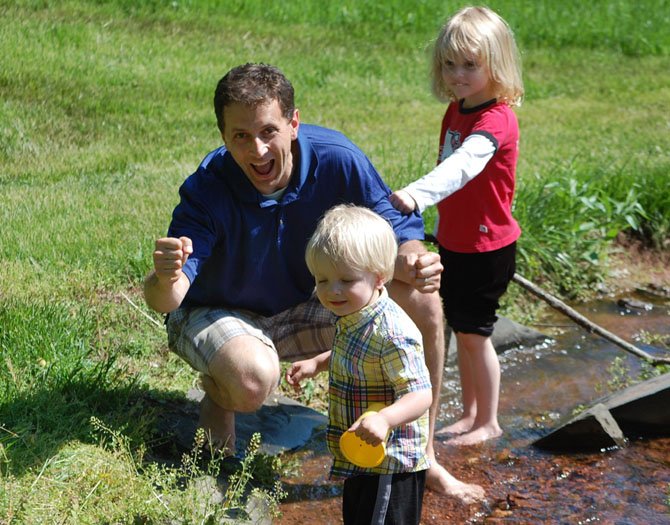 Daddy having fun with his kids! Submitted by Katherine Honea of Herndon. 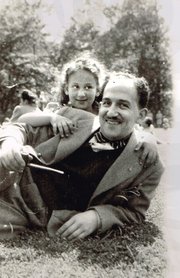 Nina Tisara, circa 1944, peeking over her dad's shoulder. Prospect Park, N.Y. Artist-photographer Tisara says, “Now the gospel I preach is to get those photos off your cameras and phones. Label them with who, what, when and where and identify the photographer!”

My father died in 1989. At the first wedding I photographed afterwards, my son Steven who was assisting me, nudged me aside during the Father-Daughter dance. He noticed that I was weeping and that I couldn't see to focus because of the tears in my eyes. I still miss my father.

My father was a quiet man, a gentle man. I never heard him raise his voice. He worked two full time jobs when I was growing up and I didn't see him very much but somehow he managed to teach me lessons I still haven't forgotten.

Lesson 1. I was walking in the street with him and I found something. All these years later, I can't remember whether it was a doll or a dollar, but I wanted to keep it. He said, “Let it stay where it is. The owner may come looking for it." I protested, "The next person who comes by will pick it up." "That's their decision," he said, "You are not responsible for that. You will leave where it is."

Lesson 2. I was worried about something. Again, all these years later, I can't remember what I was worried about. "Perspective changes with time," he said. "It's like riding on a train. The closer you are to the station, the bigger it looks. Once it's past, it gets smaller and finally disappears."

Photos submitted by readers in honor of Father's Day on Sunday, June 15.

Lesson 3. My father taught me to ride a bike. This was in Brooklyn, N.Y. In August. Pre air-conditioning. We lived in a large apartment house and the neighbors sat outside on wooden folding chairs in the evenings to escape the heat inside. The women knitted, crocheted, and gossiped. For this bike riding lesson my father wore slacks but only an undershirt on top. I was 10 or 11 years old and I was embarrassed by his "under-dressing." "What will the neighbors think?" I asked. "That's false pride," he said. "Be concerned about what you do. It is much more important than what you wear." All these years later, I remember this lesson. And I remember too, the assurance of his hand on the seat of my bike, steadying me. I can still feel it.