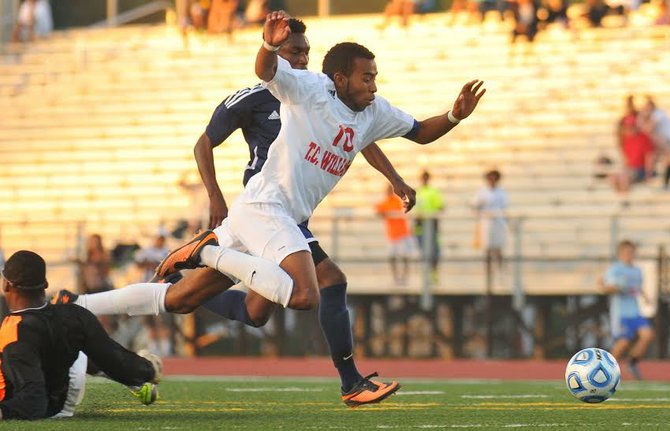 T.C. Williams forward Eryk Williamson is taken down by Hylton goalkeeper Jordan Williams in the first half of Saturday's 6A state semifinal match at Robinson. Williams received a red card for the play. Photo by Louise Krafft.

The T.C. Williams boys’ soccer team is a formidable foe when attacking at even strength.

When TC played with a man advantage Saturday, the Titans sensed blood in the water.

Wilson Miezan converted two first-half penalty kicks, Eryk Williamson netted a hat trick, and T.C. Williams earned its first state final appearance in program history with a 6-2 victory over C.D. Hylton in the 6A state semifinals at Robinson Secondary School. The Titans will face Washington-Lee in the state championship match at 2:15 p.m. today at Robinson.

Hylton goalkeeper Jordan Williams received a red card in the 22nd minute for taking down Williamson in the box. Moments later, Miezan converted his second penalty kick in a two-minute span, giving the Titans a 2-0 lead, and the Bulldogs were forced to play a man down for the remainder of the contest.

Hylton continued to battle, cutting TC's lead to 3-2 in the 41st minute, but the Titans pulled away with three second-half goals.

“We were trying to pretty much attack as much as possible,” Miezan said. “We had one more than they had, so we were just trying to capitalize on that.”

Miezan’s teammates elected the senior to take each of the first-half penalty kicks, and No. 11 came through each time.

“I’m just happy that they trust in me,” Miezan said. “… It just makes me feel proud.”

After Miezan’s PKs gave TC an early 2-0 advantage, Williamson carried most of the offensive load. The junior’s first goal gave the Titans a 3-1 lead in the 32nd minute. Williamson put the match away with goals in the 59th and 73rd.

“It’s a great feeling,” Williamson said. “We worked all year for this. We finally get to play for the championship.”

Kevin Ortez also scored a goal for TC. Ramsey Benzina had a pair of assists, and Kevin Nunez had one.

TC improved its record to 18-2 and will make its first state final appearance in program history. The Titans will face Washington-Lee (18-1-3) in today’s state final. W-L defeated TC 4-0 in the regular season finale on May 13, when the Titans were without Williamson. TC responded by defeating W-L 5-2 in the 6A North region championship match on June 5, giving the Generals their only loss of the season to date.

W-L sophomore standout Maycol Nunez, who scored 37 goals this season, received a red card for throwing an elbow in the region final. Nunez, by rule, sat out of the Generals’ 1-0 victory over Grassfield in Saturday’s other state semifinal match, but is expected back for today’s state final.