Budget without Medicaid expansion being reviewed by Governor. 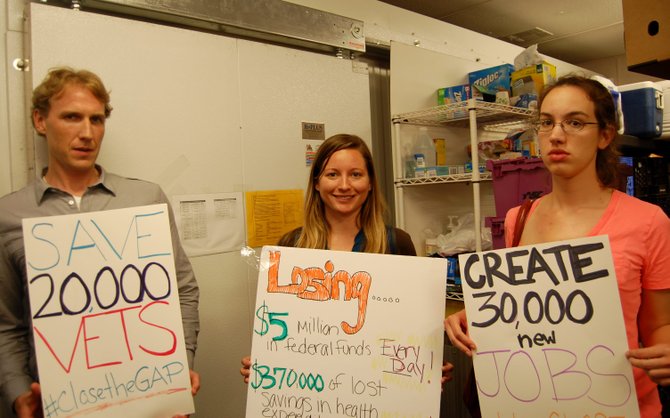 A day before Virginia legislators reconvened in Richmond and passed a budget without Medicaid expansion, advocates gathered in Lorton to show their support for expanding health care coverage to 400,000 Virginians.

Although their posters targeted Fairfax County Republicans Dave Albo, Barbara Comstock and Jim LeMunyon and urged them to support Medicaid expansion, a budget was passed June 12 without Medicaid expansion. The budget also includes an amendment blocking funding of Medicaid Expansion unless the legislature approves it.

Virginia Governor Terry McAuliffe said in a statement on Friday that the fight for Medicaid expansion is “far from over.” 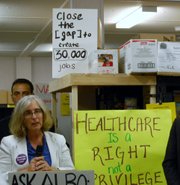 Martha Wooten, president of Neighborhood Health Services, which serves residents of Alexandria, Arlington and Fairfax County, speaks at a Medicaid expansion rally in Lorton on June 11.

“This is the right thing to do for Virginia, and I will not rest until we get it done,” he said.

Advocates at last week’s rally in Lorton echoed this sentiment, calling it shameful that expansion hasn’t happened yet in Virginia.

Several of the rally’s speakers are employees at Neighborhood Health, who shared stories of patients struggling to get by without health insurance.

OF THE PATIENTS served by Neighborhood Health, 62 percent are insured, said Martha Wooten, the organization’s executive director. This number has decreased from 69 percent, largely due to the federal health insurance marketplace provided by the Affordable Care Act.

“More than 60 percent of my patient population is at or below 100 percent of the federal poverty level,” she said.

Wooten said that although the majority of the uninsured patients have jobs, they are still below the poverty line and have trouble making ends meet.

If Neighborhood Health had been in a state that expanded Medicaid, Wooten said, they would have had an additional $992,000 added to their bottom line, allowing them to provide services to over 2,000 people more than they served in 2013.

In Fairfax County, there are 35,408 individuals who would be eligible for Medicaid coverage if the coverage gap was closed, Wooten said.

“It’s just appalling. None of us should be able to sleep at night knowing that this is going on in a society that we have any kind of ability to impact,” she said.

Many Virginia residents go without basic primary care, such as medications for high blood pressure and diabetes and screenings for cancer, said Basim Khan, medical director of Neighborhood Health. Because they don’t have health insurance, they discover their health problems only when an emergency such as a diabetic coma forces them to go to the hospital.

Patients who are served by Neighborhood Health Services are also unable to afford health specialists because they lack insurance.

“If a patient comes in with chest pains, and that’s happened this month, I’m not able to send them to a cardiologist to get stress tests to determine why they have chest pain,” Khan said.

AT THE RALLY, personal stories and anecdotes were shared, including that of 23-year-old Stephanie Cruz from Fairfax, who suffers from a chronic vocal cord paralysis condition and falls in the coverage gap. She is forced to pay $3,000 a year for health insurance because of her condition, money that she doesn’t have.

“These are real people in our communities. Their lives are impacted in very real ways,” Khan said.

Don Owens, chairman of the Dulles Regional Chamber of Commerce, said there is a practical side to expanding Medicaid, and it makes economic sense.

“I know I’m not the only one getting these emails,” he said. “But my colleagues continue to say ‘no.’”