He led agency through transformation, advocated for mental health services. 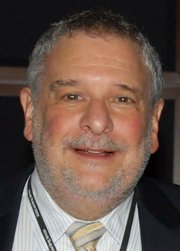 George Braunstein is retiring from his position of executive director at the Fairfax-Falls Church Community Services Board.

“My first college degree was in history and education. I was going to be a high school history teacher,” Braunstein said.

His plans changed after finishing with the Coast Guard during the Vietnam War, and there weren’t as many teaching jobs available as he expected.

“I had always had a desire to do some form of public service. Somebody suggested, why don’t you try nursing? I didn’t think I had any aptitude for anything to do with the medical field, but I tried it, and I did fairly well,” Braunstein said.

Braunstein’s first job was working as a nurse in a multi-county inpatient mental health facility in Wisconsin, eventually becoming the administrator and manager in 1986.

“I ended up eventually running the place because I had some previous management experiences,” he said.

Now, Braunstein is retiring from his role as executive director of the Fairfax-Falls Church Community Services Board, a public agency that provides services for members of the community with mental illness, substance use disorders, and intellectual disabilities.

Since becoming CSB’s director in 2008, colleagues say Braunstein has worked tirelessly to inform the public of the need for community mental health services.

“George is a master at being able to succinctly describe for news reporters and for the general public the big picture and the importance of what we do at the Community Services Board and how important these services are for the most vulnerable people in our local community,” said Belinda Buescher, communications director for the CSB.

Braunstein’s ability to remain calm and focused in stressful times was evident in November 2013, when Buescher said the unfortunate Creigh Deeds tragedy gave Braunstein the opportunity to put things in perspective for reporters and the community.

“He was able to remind people that individuals with serious mental illness are far more likely to wind up being victims of violent crime, rather than perpetrators, and to remind people about the importance of putting in place community services that can help people before they reach a crisis stage,” Buescher said. “He was able to put an issue like the importance of having emergency psychiatric hospital beds, which is important, into perspective and remind people that it is not the only solution to our problems with not having sufficient services for people with mental illness.”

According to Jane Woods, a board member of the Fairfax-Falls Church Community Services Board, Braunstein has worked tirelessly with staff on transforming the mindset of the agency and making the client the center of services.

“The essence of the changes we’ve done in Fairfax in the last five years is creating an environment that supports getting people who are homeless into housing, providing a wrap-around service for those people, providing more job training, and providing more integrated health care, so that people who haven’t been to a primary care doctor for years can get primary care services,” Braunstein said.

Braunstein’s most satisfying experience at CSB has been working with what he describes as dedicated, skilled and caring staff and providers.

“The Fairfax providers are so skilled and so effective. They deal with some of the most challenging situations because of where we are in the greater D.C. area. We have a lot of folks with very complex problems, a combination of urban and suburban issues, and the staff is just fantastic to work with, both in administration and the service delivery areas,” he said.

According to Braunstein, government officials like Chairman Sharon Bulova understand the need for local funding for mental health services.

Bulova presented Braunstein with a proclamation honoring his contributions to the CSB, and declared Feb. 27, 2014 to be George Braunstein day in Fairfax County.

According to Bulova’s proclamation, Braunstein “has steered the CSB through a major organizational transformation, pioneered nationally recognized best practices throughout the service system, and advocated with courage, skill and tenacity for services to meet the needs of the most vulnerable people in our community.”

Braunstein said a frustrating part of working in the mental health field has been challenging the idea that problems such as drug and alcohol addiction are a weakness of character.

“Probably the most difficult part of working in the mental health field is that it has taken an awful long time even making short strides so that people understand the legitimacy of the services that we do, and see it as equally valid as any other services in the health care field,” he said.

Mary Ann Bergeron, the executive director of the Virginia Association of Community Services Board, said Braunstein has been a great leader ever since moving to Virginia in 2000.

“He is a master at taking very complex issues, and being able to identify solutions to an issue,” Bergeron said. “He’s been a wonderful source of inspiration.”

Braunstein’s colleagues say his leadership and guidance will be missed as he retires.

“George was at the helm of the CSB's transformation from a siloed system that offered specific services for certain diagnoses into an integrated system based that supports the whole person based upon the level of care he or she needs, with a focus on helping all individuals gain access to cross-cutting services such as primary care, housing, employment and peer supports,” said Jeannie Cummins, investment and development manager at the CSB.