Are LEDs the Bulbs of the Future?
Votes

Are LEDs the Bulbs of the Future? 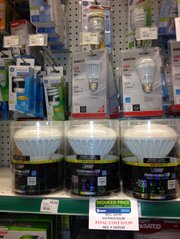 Some of the many new lighting choices available at Strosniders.

Light bulbs. It used to be easy. Walk into the hardware store and pick out the wattage you need. But, for those of us who have recently found themselves part of the bewildered throng gathered in front of the new LED (light-emitting diode), CFL (compact fluorescent lamp) and halogen light bulb displays, there is hope as local experts weigh in on the issue.Idrissa Bagouda knows a lot about the subject. He is one of the lighting technicians at Bethesda’s Home Depot. Lately his job has gotten a whole lot busier. “Each day, I’d estimate I receive 35 or more requests from customers to explain how the new light bulbs work,” he said “I try to educate them about the different options, especially since there is a limited supply of the old incandescent bulbs remaining and the store won’t be carrying them much longer.”So why will the old incandescent bulbs no longer be available and why are the new choices so confusing? The back-story is, that starting in 2012, all new light bulbs were required by law to consume 25 percent less energy. The new standard, set to phase in 2012-2014, did not ban incandescent bulbs or any specific bulb per se; it simply mandated that they had to use less energy. These efficiency standards were established in 2007 under the bipartisan Energy Independence and Security Act (EISA.) The new standards have resulted in an ever-widening array of energy-efficient, long-lasting light bulbs becoming available to the consumer. The LED is the newest among them. The LED has a radically different structure than that of traditional incandescent, halogen and CFL bulbs. Whereas these older bulbs produce light by heating a filament, LEDs create light using semiconductors. Each bulb contains varying numbers of diodes that, when placed in contact with each other, release energy. It is this energy that produces light.This new technology has many advantages, among them high efficiency, low energy consumption and long bulb life. Noted Bagouda, “LEDs save you money over time and have a much longer lifespan than CFLs and other more traditional bulbs.”Confusion arises, however, when consumers try to compare the luminosity (the amount of light emitted) of the LED and the other new, energy-efficient bulbs to the traditional ones, using the commonly accepted measure for brightness — wattage. Since wattage represents electricity consumed, not actual brightness, it doesn’t serve well as a measure. Without a new language for understanding brightness, it is particularly hard to choose among the new lighting choices. In anticipation of this, the Federal Trade Commission (FTC) in 2011 mandated that all light bulb packages display a previously little-known unit of measurement, the lumen, as the primary standard for comparison.Lumens are a measure of perceived brightness; the higher the lumens, the brighter the bulb. A typical 60-watt incandescent bulb, for instance, emits around 660 lumens. Compare this to a typical 9-watt LED bulb, which emits 900 lumens. If you compare the two bulbs by wattage, the incandescent bulb would appear by the old standards (60 compared with 9) to be brighter, Yet, the LED bulb actually emits 27 percent more light than the incandescent bulb, all while consuming 51 watts less energy.

While current LEDs are almost 10 times more expensive than incandescent bulbs, at around $20 versus $2, their increased lifespan and energy efficiency can result in significant financial savings over time. LEDs have dramatically long lifespans, estimated at 10 years, assuming 3-5 hours of daily use. Whereas the typical incandescent bulb lasts around 1,000 hours, LEDs last 25,000, or more than 10 times as long.

ACCORDING TO POTOMAC Strosniders’ lighting authority, known to regulars as “David,” LEDs are the smart choice for their long lifespans and versatility. David has noticed more people choosing LEDs over CFLs for this reason. “LEDs are preferable because of their longevity and the fact that the whole LED line we carry is dimmable without restrictions, “ he said. “With CFL bulbs, you need to check the packaging to see if that is the case,” he added.The benefits of LEDs are many. With no filament to break, the bulbs hold up well to jarring and bumping. They will not cause heat build-up and are cool to the touch. And, unlike CFLs, they are mercury-free.Pepco offers rebates to consumers when they purchase low-energy bulbs. “Rebates have received a very strong response and are the single most important factor leading to more people being interested in LEDs as a category,” said David. “There is no paperwork involved and the customer can take the rebate instantly at the register.” Rebates can shave as much as half off the cost of the bulbs.While LEDs are all the rage, don’t count CFLs out entirely. Originally developed in the 1980s to replace incandescents, CFLs consist of a tube, which is curved or folded, with a compact electronic ballast in the base. These bulbs, which last from 6,000 to 10,000 hours, remain a good choice for energy-efficient lighting and are still being offered by many area builders. While they cost more than incandescents, CFLs use about a quarter of the electricity.A significant downside to CFLs, is that they contain mercury, a neurotoxin that makes disposing of them problematic. Moreover, the bulbs start up slowly and can take 10-15 seconds to light. And, while improvements have been made to the quality of the light they emit, it remains a chief complaint among consumers. As they grow more popular, however, CFLs are changing and they can now be purchased in various shades of white, with the best “soft white “ rated similar in color to a standard incandescent.Halogen bulbs are still widely available. However, they are not nearly as efficient as LEDs or CFLs. The halogen bulb, which uses a cyclical chemical reaction to produce light, is essentially an efficient variety of the incandescent. Halogen bulbs consume 30 percent less energy than the traditional bulbs. Dimming the bulb can save even more.A downside is that in addition to higher energy consumption, halogen bulbs require higher temperatures for the chemical reaction to work, posing some fire and burn hazards.The traditional incandescent bulb still has many loyal fans. These fans are more comfortable with the bulb’s familiar technology and warm, rich light, despite its short lifespan of 750-1000 hours. Energy-savings, for now, hold little allure. David noted with a chuckle that the majority of customer requests he receives have less to do with what the differences are between the low-energy bulbs, than if the incandescents are still available. He explained that, though the bulbs are no longer being made, there are many still available.

David observed that the ongoing popularity of incandescents ranges across the board, with no distinction as to age. “People seem to prefer the softer light,” he said.Indrissa agreed: “A lot of people still prefer incandescent light to that of the new bulbs, he said, “because that is what they are used to. I point out that the bulbs are being phased out and that if you run out, you won’t be able to buy any more.” There are many kinds of LEDs currently available with standard and pin bases that fit existing light fixtures. Consumers can choose between cool and warm light. There are also “retrofit” kits, complete with LED bulb and trim, available in stores and on-line that insert into old ceiling housings for a more modern look. Here are some of the most typical styles. COMMON STYLES OF LED BULBS Diffused bulbsThis bulb is a standard household bulb with a traditional screw-in base. It is used as area lighting for rooms, lamps, and other low-light applications.Dimmable Globe bulbsDesigned for bathroom vanities, these bulbs produce light equivalent to a 40-watt incandescent, yet consume only 10 watts of power.Flood ReflectorsFor recessed cans and track lights, these LEDs have a screw-in base and fit in standard recessed lighting housings.Flame TipDesigned to replace incandescent candelabra bulbs, these LEDS deliver the equivalent of a 25- watt incandescent bulb while using only 3.5 watts of electricity. Tube LightsDesigned to replace traditional 25-watt and 40-watt fluorescent tube bulbs.Dimmable LED Light BulbsNewly released, these LEDs are great for mood lighting in the home. They must be paired with a hardware dial control switch to function properly.