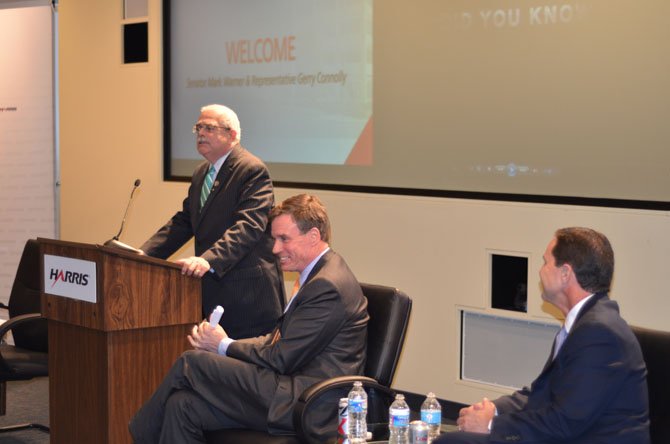 Federal contractor Harris Corp. (NYSE:HRS) is an international communications and information technology company serving government and commercial markets in more than 125 countries. The building was originally built for BAE Systems, which moved out in 2012. It is also situated near the planned future Herndon-Monroe Metro station.

“We moved in a month ago in stages,” said Rebecca Goodsell, a marketing and communications manager for Harris Corp. “We are now in a much more collaborative environment.” Harris employs close to 1,700 persons in Virginia, and the Herndon facility is centered in Northern Virginia’s high tech corridor. “What distinguishes Harris from its competitors is the amount of our own R&D dollars we invest in innovative, cutting-edge products and solutions for our customers … this year, over a quarter billion dollars and growing,” said Harris CEO William “Bill” Brown.

“This has been a major undertaking to consolidate seven different locations, and I cannot thank the people enough that participated in bringing our teams together,” said Harris Corp. Group President Jim Morris. “It was a tremendous amount of work accomplished in record time. We are very pleased with the final product and know that this will support our collective businesses as we grow in the years to come.”

Guest speaker U.S. Senator Mark Warner (D-Va.) applauded the work done by everyone at Harris, and praised the research and development teams. Both Warner and U.S. Rep. Gerry Connolly (D-11) had the opportunity to visit tables that displayed Harris Corp. hardware and technologies. Warner pressed for the need for more spectrum availability to meet the growing demand for wireless broadband and radio-based services. “America is not going to stay competitive if we do not free up the spectrum,” said Warner.

Connolly asked Harris CEO Brown when Harris would relocate its headquarters to Virginia. “Our winters kill encephalitis and Burmese pythons,” quipped Connolly. Currently Harris Corp. offices are in Melbourne, Fla. “You have chosen to locate in the most important economic corridor in Virginia…we are delighted you are here,” said Connolly.