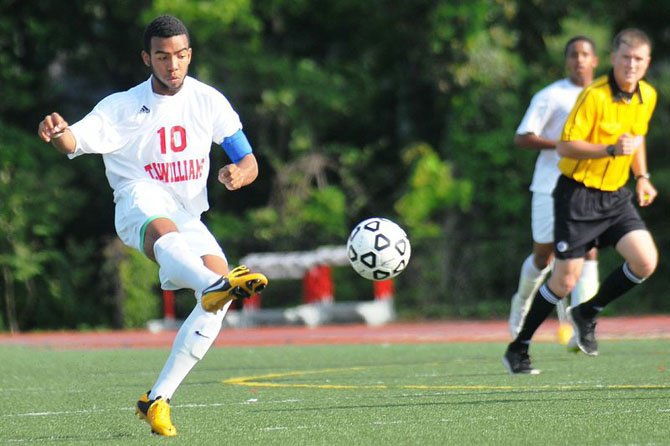 Eryk Williamson and the T.C. Williams boys’ soccer team will face South County in the Conference 7 championship game on Thursday, May 22. Photo by Louise Krafft. 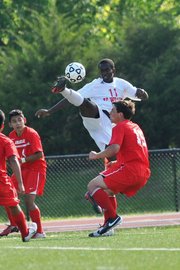 T.C. Williams senior Wilson Miezan scored a goal for the Titans during their Conference 7 semifinal victory over Annandale on May 20.

T.C. Williams goalkeeper Edgar Martinez stood subdued on the field at Parker-Gray Stadium while those around him celebrated his game-winning save.

While Martinez appeared relaxed, the atmosphere prior to his clutch play was anything but calm.

Following a wild end to regulation and four scoreless 5-minute overtime periods against Annandale, Martinez ended a penalty-kick shootout with a save, giving the top-seeded T.C. Williams boys’ soccer team a 1-1 (4-3) victory over the No. 5 Atoms in the Conference 7 tournament semifinals on Tuesday in Alexandria.

TC held a 4-3 advantage after four rounds of PKs. Annandale goalkeeper Erick Estrada kept the Atoms alive with a save in the fifth round, but Martinez’s save on the following attempt assured the Titans of a trip to Thursday’s conference championship game.

Martinez’s save was an exciting end to a hectic final 30 minutes of action.

After T.C. Williams failed to convert numerous first-half scoring opportunities, the Titans finally got on the scoreboard in the 75th minute when Wilson Miezan found the back of the net, giving the Titans a 1-0 advantage. Miezan would receive a yellow card for celebrating the goal on the track with several of his teammates.

In the final minute, with TC on the verge of victory, the referee called Martinez for taking down an Annandale player in the box and issued the Titans goalkeeper a yellow card. Martinez had to come off the field, meaning TC backup goalie Andres Avila-Riano suddenly was facing a pivotal penalty kick after spending the first 79 minutes of the match on the bench. Avila-Riano managed to save the PK from Annandale’s Diego Cabrera, but Cabrera played the ricochet and put the ball in the net, tying the score at 1.

Despite the emotional swing in Annandale’s favor, TC held on through four 5-minute overtime periods and won the PK shootout.

“We are fortunate we’ve got four really good goalkeepers,” Nickley said. “We saw Andres come in and save the one coming off cold from the bench and then Edgar comes in and matches it.”

"It’s their fortitude, their strength as a team. These guys have been set to task all year long. We’ve had a really good season. Fortunately, we’ve experienced some ups and downs so we’ve figured out ways to battle back.”

TC controlled the match early, creating countless first-half scoring opportunities, including numerous corner kicks. The Titans failed to put one in the net, however, and Annandale seemed to gain momentum in the second half.

“You could just see it in the faces [of the Titan players],” Miezan said. “People were starting to get a little down, but coach told us just to stay in there and that’s what we tried to do.”

After an afternoon of hard work, Miezan finally put the Titans on the scoreboard.

“It was a really good lift,” he said.

The lift was short-lived, however, as the Titans had to overcome another opportunity for an emotional letdown.

“It’s their fortitude, their strength as a team,” Nickley said. “These guys have been set to task all year long. We’ve had a really good season. Fortunately, we’ve experienced some ups and downs so we’ve figured out ways to battle back.”

TC improved to 12-2 on the season and will face No. 7 South County in the conference championship game at 5 p.m. on Thursday, May 22. South County, which finished the regular season with a 2-9-2 record and in last place in the conference standings, knocked off No. 2 West Springfield 2-1 in the quarterfinals on May 16, and beat West Potomac 1-0 in the semifinals on Tuesday.

“It’s going to be fun,” South County head coach Erich Gunderman said after the Stallions defeated West Potomac. “Playing over at their place in the hot sun, it will be a challenge for us. TC, hey, they’re the No. 1 seed for a reason. They have a lot of talented athletes over there, [they are] well coached by Marty and we have our work cut out.

“We’re the underdogs coming in, but maybe it’ll be our time.”