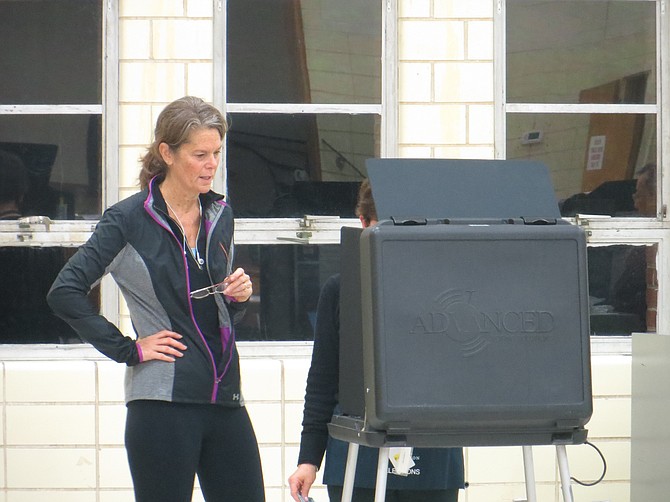 Kathy Kiernan, first in line to vote at the Madison precinct, at the ballot box. Photo by Vernon Miles.

Arlington — Arlingtonians lined up to vote on Election Day to choose between Democratic U.S. Sen. Mark Warner and Republican challenger Ed Gillespie. At a more local level, they also chose a candidate to represent the 8th district in the House of Representatives, to vote on the candidates for County Board and School Board, and to vote on four bonds.

The first voters came into the Madison Community Center before dawn and lined up in the hall, with election workers passing out sample ballots and urging citizens to have their identification ready, all of them waiting for 6 a.m. Thirteen hours later, the polls were scheduled to close at 7 p.m.

For Caroline Klam, one of these election officials at the Madison precinct, there still won’t be enough voters coming through the precinct. Looking at the room more crowded with campaign workers than voters, Klam noted that turnout would likely improve later in the day, but it wasn’t as crowded as she had hoped it would be.

“55-60 percent voter turnout is abysmal,” said Klam. “We should have Saturday voting … we should make it easier for people to vote.” 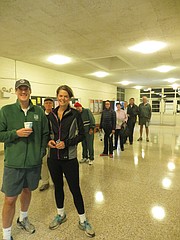 Kathy Kiernan at the head of the line to vote at Arlington's Madison precinct.

“We had a line out the door at six o’clock this morning,” said Lott. “This is a close race, and we generally get more people for the federal elections, so that’s a draw. The county seat is pretty tight as well, and the bonds affect people here.”

“This particular ballot has real choices on it,” said John Beach, one of the first voters at Madison. For Beach, the senatorial race and the bonds on the Arlington ballot were his biggest focuses. “This county is very effective in supplying goods and services to its constituents. It’s a very effective county; it’s not the debt here that I’m worried about.”

The Arlington ballot’s four major bond issues total $219 million to fund transportation, parks, local infrastructure and public schools. Carmen Miller, another voter at the Madison precinct, has said the bonds were her biggest issue going into her vote.

“We’ve got kids in school here,” said Carmen Miller. “The schools are too overcrowded, and we need to make sure we have enough infrastructure to support them.”

For Carmen’s husband, Matt Miller, the focus was on the Senate race.

“The majority in the senate is up for grabs, and I want to make sure we keep Mark Warner,” said Matt Miller. “He’s a great senator.”

The senate race, for many voters, was what got them out of bed and to the polls that morning.

“[The biggest issue is] control of the senate and the house of representatives,” said Susan Gajewsky at the Marshall precinct.

As in most elections, the streets outside the polls were dotted with staff from the various campaigns. Marjorie Singer was one of the volunteers representing the Arlington County Democratic campaign in the election.

“In this state, elections can be won in a handful of votes, as we saw with the recount for attorney general,” said Singer. “Look at what Mark Herring has done already; he’s made marriage equality possible in Virginia. That’s very important for me because one of my kids is in a same sex marriage and now her partner can adopt, legally, their child.”

On the opposite side of the sidewalk, Chris Walsh represented the campaign of John Vihstadt, an independent running for reelection to the Arlington School Board against the Democratic challenger Alan Howze.

“There are specific issues that are important, but the election is more about tone,” said Walsh. “[It’s about] finding common ground; less about Republican, Democrat, or independent, but do you have good ideas and can you work with the other people in the legislative body to get those ideas implemented into law. I’m old enough to remember when there was more civility in politics, not that people were any less passionate. There were ways to work together, both at a national and a local level.”

John Schneider, a senior at Yorktown High School, was also helping to run the polls at the Madison precinct. Schneider is 18, and while he did not register in time for the election, he was encouraged by his government teacher to find other ways to participate in the local elections.

“I’m planning on writing about the process for my class,” said Schneider, who added that if he could vote, budget issues would be his biggest focus in the election.