Letter to the Editor: Who Will Protect River?
Votes

Letter to the Editor: Who Will Protect River? 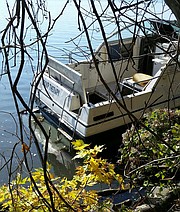 An environmental incident waiting to happen.

For over a month, an abandoned boat named "Group Therapy" out of Washington, D.C. has been tied to trees along the shoreline of the Potomac River next to the George Washington Parkway just south of the exit for Vernon View Drive. The existence of this boat is well known — I have seen its presence reported in the local press.

As the accompanying photo shows, the boat's swim platform is under water. This means the boat is sinking. Boats are well known to contain numerous noxious chemicals including gasoline, oil, ethylene glycol (antifreeze), transmission fluid, and others. If the boat sinks, presumably chemicals such as these will be released into the river.

Our local Mount Vernon community "boasts" an unusually large collection of politicians, police forces, and self-described environmentalists. Why is it that this potential ecological disaster has been permitted to fester in our midst for this length of time?

I trust someone in authority will see to it that this boat is immediately towed away and prevented from causing an environmental disaster.