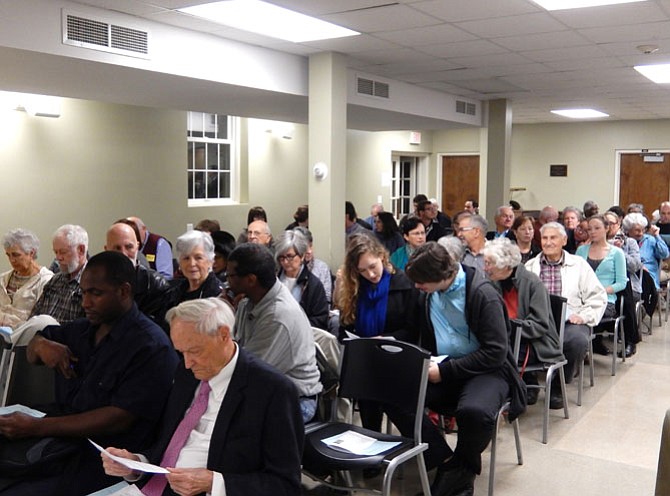 The crowd on one side of the room reads about rental costs in the City of Fairfax before the meeting starts. Photo by Bonnie Hobbs. 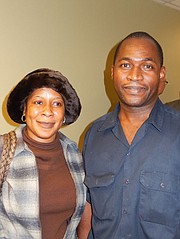 Fatmata and Dennis Kelfala live in the Oak Knoll Apartments, and Dennis discussed the need for affordable housing in the City of Fairfax.

There was standing room only last week when residents and elected officials poured into Fairfax Baptist Church’s fellowship hall to discuss affordable housing in the City of Fairfax. And that church’s pastor, the Rev. Henry Brinton, got right to the point.

Convening the meeting was VOICE (Virginians Organized for Interfaith Community Engagement), a nonprofit coalition of 42 local faith organizations and nonprofits representing about 100,000 people. This summer, it conducted an in-depth survey of more than 150 working families about their work and income.

THE FINDINGS revealed a critical need for housing for families earning between $25,000 and $65,000/year. They include nurses, teachers, construction and childcare workers, cooks, waiters and retirees who mostly live and work in the City, but find themselves increasingly priced out of it due to escalating rent costs.

So at the meeting, last Monday, Nov. 10, Brinton asked Fairfax officials to explore using both public and nonprofit land for affordable housing and agree to provide 220 such units to replace those VOICE believes will be lost when older housing is redeveloped. He said the City Council is considering 2,500 new homes proposed for construction here and 220 would be 10 percent of that amount.

“We want a commitment to make redevelopment contingent on providing affordable housing,” said Brinton. “It’s a pro-business stand because our business leaders need a place for their employees to live near where they work, such as at Fairfax Nursing Center and the Greene Turtle. We want this to be the most important issue in the City between now and the next election.”

Dennis Kelfala does electrical, plumbing, air conditioning work at Fairfax Nursing Center, and lives with his nursing-aide wife and four children in the Oak Knoll Apartments. Seven of his co-workers also live in that complex.

“I migrated from Sierra Leone and, as a low-income employee, I care about affordable housing [remaining] at Oak Knoll,” he said. “I do the maintenance work at the [nearby] nursing center and, if there’s a problem, they need me to be able to get there quickly and fix it for the patients.”

Kelfala called affordable housing “a key motive for us who’ve come from third-world countries to be part of the American dream. I appeal on behalf of all the Oak Knoll residents that the decision-makers make something available for low-income residents like us and make affordable-housing a priority. I’m proud to live in the City of Fairfax and I want to stay here.” 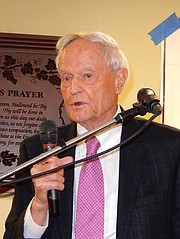 Robert Bainum, Fairfax Nursing Center president and owner, said about 10 of his employee families live at Oak Knoll. “We used to have 20 affordable-housing units near us,” he said. But they were demolished and replaced by 40 expensive townhouses.

Bainum said hundreds of his facility’s elderly patients are from the City of Fairfax but, because of high housing costs, many of his employees must drive an hour to get to work. “It’s hard to get employees when they have to commute so far,” he said. “So we have to keep it affordable.”

ADDRESSING the Council members and Mayor Scott Silverthorne in the audience, Bainum said, “We’ve been here 50 years, and we need our elected officials to help us so our employees can get here quickly, especially in the event of a heat emergency. So help us, will you please?”

Silverthorne said a pledge of a one-for-one replacement of affordable homes is hard to do. “We dropped the ball by doing less [about affordable housing] at Fairfax Circle than we could have,” he said. But Silverthorne assured the crowd that the City’s “not going to approve 2,500 new units.”

He and Councilmen David Meyer and Michael DeMarco then pledged to learn how public and nonprofit land can be used for affordable housing. They also agreed to include affordable-housing guidelines or requirements for developers like those in surrounding jurisdictions in the City’s development-approval process.

“Affordable housing is also an issue of social justice,” said Meyer. “I think 5 or 6 percent of the number of units built should be our goal for affordable housing. And they should be disbursed throughout the property and remain affordable in perpetuity. I think we can do more – and in a way that’s measurable and accountable.”

DeMarco said he supports the creation of affordable housing for senior citizens, the workforce and students. “We need to look for creative solutions,” he said. “We haven’t focused on people who make less than 60-percent AMI [Area Median Income], and that’s where we need to work with a developer on nonprofit to address this issue.”

“Our city’s economy is supported by our businesses,” added Judy Fisher of Fairfax United Methodist Church. “And the workforce to support these businesses must be able to live here.”