More Than Exercise in Potomac
Votes

More Than Exercise in Potomac

By By Colleen Healy

What if healing were as simple as moving? This is the question writer and yoga student Anne Samit asks in her debut book, “Unfold Your Mat, Unfold Yourself, Essays on Yoga’s Healing Truths and So Much More.”

Samit is a longtime yogi. She says her yoga practice “put me back in touch with myself. I found solace in yoga and it gave me a greater understanding of myself physically and mentally. I am a private person but put nuggets of me in the book. That was another exercise in courage.”

Movement as medicine is an emerging concept that is already widespread throughout the yoga community. Samit said that she stumbled upon this concept once she started practicing and that, for her, it had proved true. 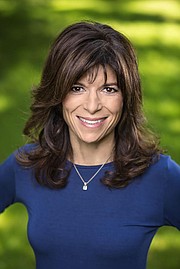 “I started practicing yoga with the sole intention to exercise, but I was surprised to find that it affected me on an emotional and spiritual level, too. I was not looking for that,” said Samit. “I didn’t know it would become a way of life, and that moving on a mat could be so transformative.”

Samit practices yoga almost daily, and her simple quest to exercise ignited a therapeutic journey of self-discovery. She blogs on the impact of her practice, and her book is a compilation of her essays. She says her writing is an outgrowth of her practice, and that one facilitates the other.

“Writing came about in much the same way as my practice,” said Samit. “I simply started, and then I couldn’t stop.”

Samit says that exercising was as new for her as the yoga practice itself, and that she found the movement to be energizing and healing. She began writing about the practice and, before she knew it, she was writing about herself. The essays in her book are divided into a framework of what she terms as “Healing Truths” and cover subjects such as perspective, self-belief, inhibition, anxiety, spirituality, inner power, courage and more. Each essay comprises a balance of revelations about both the practice and the author.

“[One of my instructors] always spoke about what lots of people speak about in yoga, and that's to ‘trust the process.’ This phrase always sounded so general to me, and I never really understood what it meant. But as I put the book together and, especially, as I was finishing, I finally came to understand it [by writing this book],” she said. 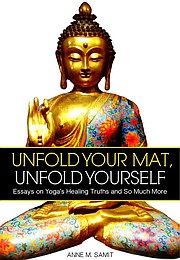 Samit said this book is for yogis and non-yogis. “I think the reader can relate to something in my experiences and connect with that. There are many different kinds of yoga, and so it’s a practice that can strengthen anyone at any level at any time.”

With a Bachelor of Science in journalism from the University of Maryland and a background in public relations, Samit is currently an executive assistant at a health industry consulting company. She is a regular columnist for www.elephantjournal.com and her articles have appeared on AOL’s localized news sites, www.Patch.com, The Jewish Week and her own blog, www.Yoga-Speak.com. Her book is available on Amazon in paperback and as an e-book.