Synetic Theater is staging the French fairy tale, "Beauty and the Beast," Dec. 3 through Jan. 11.

In this movement-based adaptation, produced by Paata Tsikurishivili, directed by company member Ben Cunis and adapted by Ben and Peter Cunis ("The Three Musketeers," "Genesis Reboot"), Synetic draws on the darkness and sensuality of the original story to create a passionate and inspiring Gothic romance. Synetic’s athletic actors and innovative theatrical effects will transform this classic story into a visual dream full of wonder, mystery, and redemption. 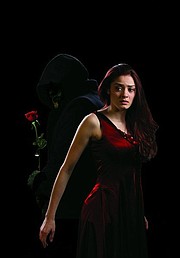 Synetic Theater in Crystal City will stage "Beauty and the Beast" Dec. 3 through Jan. 11.

Director Ben Cunis called "Beauty and the Beast" a timeless story — the kind of thing Synetic is best suited for. "I love digging into these big archetypal stories and finding out what resonates to us today," he said. "When you look closely, even just a little, it's a story with a lot of darkness before the light. That contrast — darkness and light, conscious and subconscious — is what ultimately drove the work."

Cunis said, "There's a depth of meaning in fairy tales that transcends cultural boundaries....There's something deep and essentially human in these tales, and we have tried to dig out some hidden meanings and characters in this telling."

"We also wanted to explore new kinds of imagery and take our physical storytelling to a new realm — the combination of physical acting with shadow images was our answer there," he said.

As far as challenges, Cunis said with such a well-known story, the number of directions one can take is endless. "Determining what elements are the most important for our version was a large undertaking that required a lot of teamwork. The shadow work, because it requires tremendous accuracy, is painstaking and takes a long time to create even the briefest moments."

Producer Paata Tsikurishvili said he decided to produce the show because it is one of the most well-loved and well-known in the history of literature.

"Every culture has their own 'Beauty and the Beast;' it's been reincarnated so many different times and in so many different ways — onstage, onscreen, on the page, in music, opera, you name it — and for all that, it still remains instantly recognizable and universal ... and I felt it was our turn to give it a try, to bring our own style to it."

He said, "Physical transformation is also vital to what we do as a company, so, as always, trying to highlight the key themes of a classic text through physical expression was our goal with this production, which was chosen largely because the nature of the story affords us fantastic opportunities for just that."

While Tsikurishvili said the play can be more than just a simple children's tale, he hopes people will take away that there is a darker, more dangerous undertone to this story — "that there is a genuine menace to the kind of selfishness for which the Prince is punished."

He added, "Too often, I think that aspect is ignored: 'There was once a Prince who had been turned into a Beast,' and, in many adaptations, it's left there and we really don't see why. Here, we explore a whole backstory for the Prince/Beast, hopefully giving more depth and understanding to this very well-known, yet still very mysterious character."

Renata Loman plays the role of Emeranne, the witch who put the curse on the Prince and turned him into a beast. With the only speaking part in a silent show, she said it was challenging to build a world where the spoken story and the wordless actions seamlessly blend together in a fairy tale. And since the witch is not a real living person and comes from the world of magic, "How do you play someone who lives only in fairy tales, someone you have never seen, but only imagined," she said.

Vato Tsikurishivili is playing the role of the "prince beast," a heavily layered and complex character. The prince, who is paying a price for a moment of weakness, a mistake of betraying the one he loved, is consequently cursed and transformed into a beast. "His tragedy is that despite his gross physical exterior, he possesses a big heart and a good one at that," he said. "He is a gentle, kind, caring and endearing being on the inside."

He added, "I very loosely relate him to Shrek in the sense of who he is vs. what he looks like and how the book simply does not match the cover, so to speak."

As far as challenges, he said everyone in the production — the artists, designers, writers, producer, director, choreographer, musicians, costumers, the technicians — "has overcome adversity of one kind or another to make this happen. It's been crazy, it's been frustrating, it's been fun, and it's been awesome," he said.

He said he hopes each individual who sees this show leaves with something unique to them. "Have an open heart and an open mind, and you will leave with plenty," he said.

"Beauty and the Beast" is playing Dec. 3 through Jan. 11. Show times are Wednesdays through Saturdays at 8 p.m.; with Sunday matinees at 2 p.m. Tickets are $35 and up; student tickets start at $15; senior citizens and military receive $5 off; group discounts are available. Synetic Theater is located at 1800 S. Bell St., Arlington, in Crystal City. Visit www.synetictheater.org or call 866-811-4111.