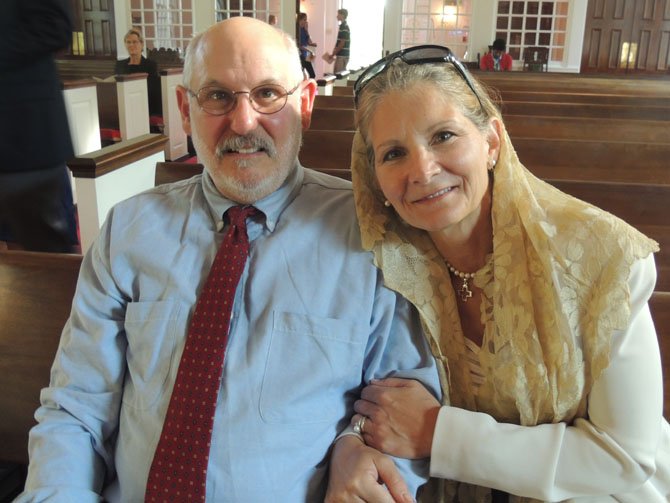 The Jacobs have married each other two separate times. Photos by Bob Peterson and Susan Belford 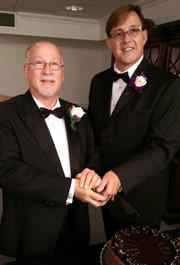 When Peggy Conn suggested to her husband of 62 years that they participate in a Renewal of Marriage Vows ceremony with other couples from the Potomac United Methodist Church, her husband Dick responded, “I had no idea our marriage had expired.”

The Conns, along with 17 other couples, celebrated and paid tribute to their spouses, marriages, and families. Couples who had been married from one to 62 years convened in the sanctuary of the church along with the church’s choir, choral director Rosemary Dyer and Pastor Ann Laprade, families and friends. Pastor Ann Laprade and her husband Tom also reaffirmed their vows. They have been married 18 years.

“I want to sanctify these couples. I send you a blessing for keeping marriage as a Covenant,” Laprade said. “We are here to celebrate your marriages and committed partnerships. Love is a blessing. It is more important to love than to be loved – to give, than to be given to. Marriage is not a 50-50 proposition. Marriage is each person giving 100 percent. If you give beyond 50 percent and put the other person first, then joy will come. The more you give, the more it comes back to you.”

Every couple had a story to share. The Conns were married 62 years ago in Kansas City, Mo. Dick Conn advised couples to “Stay the course. I keep wondering where the years went. It seemed like only yesterday that we got married.”

Suzanne and Bill Doggett, Pam and Paul Zambrotta, Angie and Todd Bardwell as well as several other couples were married at Potomac United Methodist Church and shared memories of their weddings. Katie Jacob and her husband had actually been married two times to each other. They dated in high school, married at age 28, divorced at age 44, remarried at ages 47 and were thrilled to reaffirm their vows. “Being together now means more to us than ever,” said Katie Jacob.

Angie Bardwell said, “My husband, Todd and I are renewing our vows on Saturday. We were married at Potomac United Methodist Church in 2008 and have three daughters. We really decided to do it because our three princesses, who all want to marry their ‘Daddy’ and will thoroughly enjoy being a part of this fun occasion. Pastor Ann called it ‘family friendly’ so they will be dressed accordingly, probably like princesses.”

Vincent Youmans performed “Through the Years” and Laprade read, “Beloved, let us love one another, because love is from God; everyone who loves is born of God and knows God” from the book of John.

The service ended with Shakespeare’s Sonnet CXVI: “Let me not to the marriage of true minds ...”