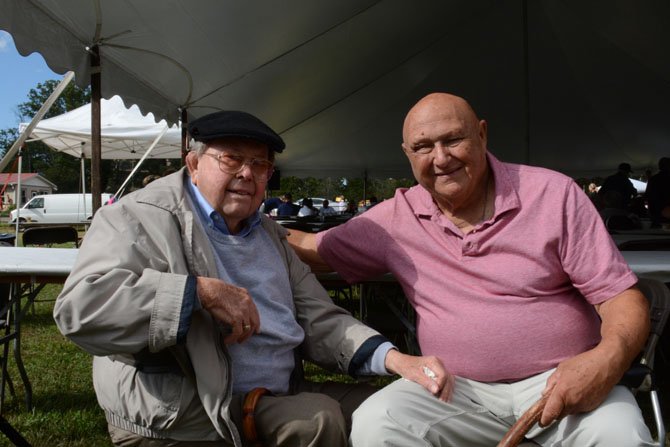 Fifty-two-year Mount Vernon resident John I. Morton (left) and Mount Vernon District Supervisor Gerry Hyland (right) catch up under the tent on Justice Snowden Farm. “A man from Maine came down and taught us how to do it,” said Morton. “We thought it would be a good fundraiser, and it has been. I’ve been to every damn one of ‘em.” Photo by Tim Peterson.

Fairfax County director of health Gloria Addo-Ayensu (right) and event co-chair John Harris cross paths to talk about the food at Hyland’s 24th Lobsterfest fundraiser. “It’s always a fun event. It’s great to come out here to see people and support Gerry. I don’t come to this part of the county very much. This is my seventh time.”

For about the last quarter-century, Harris has been meeting the Maine overnight hauler and bringing the treasured crustaceans to Justice Snowden Farm to meet their doom, and a few hundred of Hyland’s friends, supporters and colleagues.

Feeding those hungry backers and company also requires a near-Biblical 600 ears of corn and 100 quarts of seafood chowder, prepared by Hyland himself. Members of the Fairfax County Fire Department oversee the boiling — not steaming — of the clawed fellows, a semi-industrial operation requiring vast stainless steel kettles and propane tanks that responded much better to this year’s sunlight and stiff breeze than various precipitation in previous years.

“It’s gone beautifully, not only because of the weather, but also because of the friends and supporters I've had over the years continue to come and enjoy themselves,” said Hyland.

“It's an opportunity for me to thank the people who have put me here,” Hyland continued. “But to also, I've had people come up to me, bring matters to my attention. And that's wonderful, because then that means you're accessible; they have something on their mind, and they want to talk about it. I like that.”