Marriage Equality in Fairfax and Beyond
Votes

Marriage Equality in Fairfax and Beyond 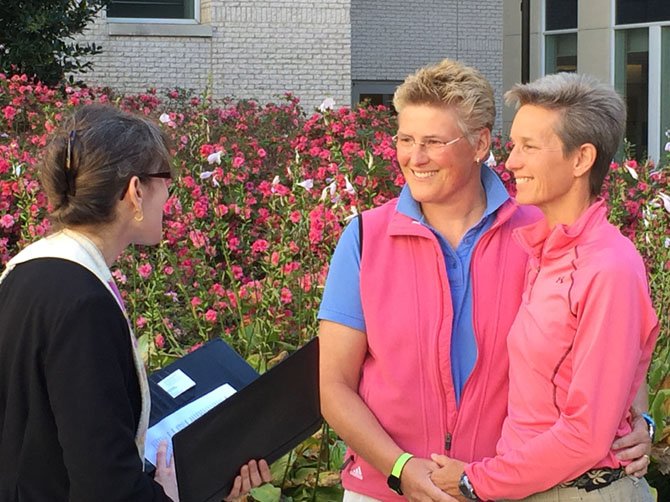 Wearing matching hot pink outerwear and short, spiky hair in front of the Fairfax County Government Center on Oct. 6, Yvonne Landis and Melodie Mayo of Falls Church were the first same sex couple to say “I do” in the county.

After nearly two decades of commitment, the couple was able to make their love official after the U.S. Supreme Court denied a writ of certiorari in the case that overturned the state’s gay marriage ban.

“On Sept. 30, I was diagnosed with breast cancer,” said Landis. “We felt that is was an important thing to have that legal status.”

She was lucky, she said, that it was caught early.

She was on the phone looking up marriage options in other states when she saw a newsflash on her television stating that courthouses around the state were allowed to perform same-sex weddings, effective immediately.

The Unitarian Universalist Congregation of Fairfax (UUCF), a leading advocate for marriage equality in Fairfax County, is celebrating the Oct. 6 legalization of same-sex marriage in Virginia.

To help make marriage a reality for the many Fairfax-area couples who have long dreamed of this opportunity, UUCF will offer clergy and facilities for brief religious marriage ceremonies free of charge through the end of the year.

For more information on available dates and clergy, contact 703-281-4230 or uucf@uucf.org.

BY THE TIME she got there with her now wife, Mayo, the minister was set up outside. The couple rushed into the courthouse, signed a marriage certificate, and asked the minister, Unitarian Universalist Congregation of Fairfax Rev. Laura Horton-Ludwig, to perform their marriage ceremony.

Fairfax County Government Public Information Officer Ellen O’Brien said she did not have a number of how many same-sex couples married at the government building last week.

“We cannot answer the question of how many ‘same-sex marriage’ licenses were issued on a given day, precisely because we treat all people equally — we do not track that query,” she said.

“This is a historic and long overdue moment for our Commonwealth and our country,” said Gov. Terry McAuliffe in a statement issued on Oct. 6. “On issues ranging from recognizing same-sex marriages to extending health care benefits to same-sex spouses of state employees, Virginia is already well-prepared to implement this historic decision. Going forward we will act quickly to continue to bring all of our policies and practices into compliance so that we can give marriages between same-sex partners the full faith and credit they deserve.”

U.S. Sen. Tim Kaine issued a statement on the eve of his arrival to India to meet with defense and foreign affair officials saying that he is celebrating alongside Virginians during the historic day.

“Today, we have taken a major step toward Jefferson’s ideal that ‘all men are created equal,’” he said.

Landis said she met Mayo in 1991 at a New Year’s Eve party and had a commitment ceremony in 1995. Two decades later, with Landis at 50 and Mayo at 58 years old, they finally were wed legally in their home state.

“It was a little surreal,” she said. “It was a bit overwhelming, but we were really happy for the state to recognize equality.”

Even more so, she was overwhelmed with support when her family and neighbors found out about their courthouse union. When they first came out about 40 years ago, she said, it was taboo to even talk about, she said. 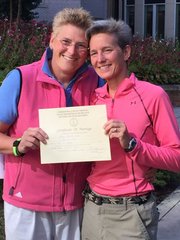 According to NOVA Pride Vice President Kyle Rohen, many of the organization’s members had already married in other states because they were not expecting the opportunity to marry in Virginia to happen so soon.

He said he heard about the news as he was driving.

“I had to immediately pull the car over and tell my husband we were finally married in Virginia,” he said.

HIS WEDDING WAS in August 2011 in Washington D.C. to a Herndon resident.

“At the time, we didn’t think that Virginia would have marriage equality for another decade,” he said. “As a transplant from Louisiana, I found that Virginia was surprisingly accepting of me and my husband.”

Although marriage equality is a reality for Virginians, he said the fight for gay rights are not over.

“While I am very thankful that Virginia has marriage equality, we still don’t have equality in many states, and they won’t have that equality for the foreseeable future.”