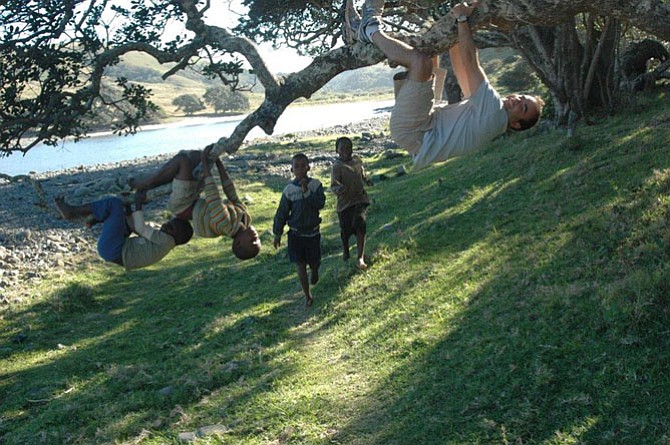 Alec Zacaroli hangs out with boys in Coffee Bay, South Africa, near the 25:40 afterschool program. Photo courtesy of Alec Zacaroli

Amy Zacaroli sits with a preschool girl on the Canzibe Mission in the Eastern Cape of South Africa.

When Alec Zacaroli and his wife Amy hosted a boyhood friend from South Africa, they didn’t expect their lives would change in one evening.

Alex Hetherington showed the Fairfax Station couple a pair of documentary films his wife had produced. One was on the environment. The other chronicled Nazareth House, a century-old convalescent home in Cape Town.

In 2003, Alec said, Nazareth was the first organization to offer shelter and support to orphans with AIDS. “There were these little kids with sores and they're just struggling to survive,” Alec said. “There was no AIDS medication getting to the people there.”

Amy was raised in foster care in Springfield, before finally being adopted by a foster family. “I saw it and thought: How did I not know this was going on, and not do anything,” she said. “We were both pretty emotional. We have to do something.”

Alec recalled feeling a profound sense of purpose. “That moment there, we were like ‘This is where God put us.’”

The couple, members of Burke Community Church, prayed over the situation and decided to found a nonprofit organization. They named the group 25:40 after the verse from the book of Matthew in the Bible that reads, “The King will reply, ‘Truly I tell you, whatever you did for one of the least of these brothers and sisters of mine, you did for me.’”

“We didn’t really know what we were getting into at the time,” said Amy. “We just sort of jumped in feet first, just trusting whatever was going to happen would happen.”

25:40 started out by raising funds for Nazareth House. Amy and Alec visited South Africa in 2004 and through the Hetheringtons got involved with a group called Homes for Kids in South Africa.

Seeing the poverty and illness firsthand was “soul-crushing in some respects,” said Alec. “But you just can't help but say there's still hope there.”

ON THAT SAME FIRST TRIP, the Zacarolis also met a doctor working in the rural areas of the Eastern Cape. They eventually followed him with their ministry. And in 2008, they joined with a mission near the town of Nthatha called Canzibe Mission, close to the home of Nelson Mandela.

At that point, 25:40 began to take a more active role in supporting the local children.

They hired 32 village workers to cover a 360 square mile radius and conduct a study to see just how bad the orphan situation was. “It’s not like they just come to your doorstep.”

The survey identified 1,504 “orphans and vulnerable children” by South African standards. Now that number is up over 2,000, Alec said. “Kids are much more than AIDS orphans. They've been moved, picked up by somebody, some relative, and those situations quickly become abusive.”

Following the results of the survey, 25:40’s “OVC Action Program” offers supplemental education, health monitoring, advocacy and skills development (like gardening and carpentry) for these children. “And we talk to them about having a relationship with God,” Alec said. “So they understand they're loved, that there’s a moral code to walk by.”

“What they’re doing is taking all these resources and dedicating it to at-risk children who will help the community become a stronger one,” said Mary Miller of Fort Hunt, the new outreach coordinator for 25:40.

The advocacy includes trying to motivate local social workers. “If we want to parachute in and do everything ourselves, it's just ridiculous,” said Alec. “We go to the social worker in town and say, ‘Do your job. Did you even know this kid exists?’”

BY MODELING THEIR PROGRAM, Alec and Amy are hopeful others like it can spread beyond Canzibe Mission, driven by local people.

“We don't pay people,” said Alec. “We support with food and materials, walk hand in hand with you. That's what we envision going forward. That's they way you reach 1,500 kids.”

Amy and Alec raise funds for 25:40 back in Northern Virginia from a grassroots group, with some corporations matching the giving. Every September they host a “Walk for the Kids” fundraiser around Lake Accotink, and on Dec. 14 they’re hosting a benefit Christmas concert at the Brightbox Theater in Winchester, Va.

“All we want to do is open people’s eyes around here,” said Amy, “to what kind of things people go through in South Africa, and most of sub-Saharan Africa.”

Alec maintains a full-time job as a lawyer and Amy volunteers at their church. The couple visits the Eastern Cape twice to three times a year, often taking turns in order to bring some combination of their son and three daughters.

“It’s opened their eyes,” said Amy. “There’s more outside Northern Virginia. To see this is not normal, when it comes to the rest of the world.”