“We went to the NICU [Neonatal Intensive Care Unit] early that morning to learn how to mix Emily's high-calorie formula and administer her vitamins. Once the papers had been completed…everything started to become real. We removed Emily's oversized hospital onesie and replaced it with a traditional take-home outfit. We put Emily in her car seat. A few minutes later, the automatic doors to the NICU shut behind…us. That's when the fear and worry began to take over. Emily was ready to come home...but were we ready? … We were leaving a special place that had become like our second home. We were leaving the doctors and nurses who cared for Emily. And, we were leaving the medical technology that kept Emily alive.” 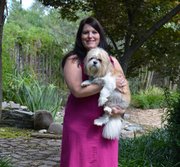 Author of “Bentley’s Preemie Blessing” Michelle Stevens of Herndon poses with Bentley, the family Shih Tzu-poodle and the “narrator” of the story which chronicles the birth of daughter Emily, 11 weeks early and weighing only 1 pound, 8 ounces at birth and her 67-day stay in the Neonatal Intensive Care Unit. Michelle wrote the book and maintains a blog to offer outreach, education and support to the families and friends of other preemies.

Michelle Stevens wrote and illustrated “Bentley’s Preemie Blessings, targeting even a young, non-reading audience. “I wrote the book for my daughter Emily, to help her understand her own premature journey, for other children like her, and the families and friends who want to learn more about babies born prematurely.”

These are the words that Michelle Stevens wrote in her blog, preemieblessings.com, on the one-year anniversary of her daughter Emily’s release from the Neonatal Intensive Care Unit, 67 days after her birth at 11 weeks early and weighing only 1 pound, eight ounces.

Michelle and husband Craig had had a pretty action-packed year prior to Emily’s arrival, one filled with changes. The couple wed and Michelle moved from the “city” to the “country,” leaving behind the conference calls and Capitol Hill meetings that went along with a job as the VP of Public Policy for a trade association. Then, at the “ripe old age of 36…considered to be of advanced maternal age” she writes, Michelle found out she was pregnant.

RIGHT FROM THE START there were complications, challenges and concerns. When her unborn daughter was diagnosed with intrauterine growth restriction and small gestational age, doctors warned of the probability of a miscarriage, sighed when they reviewed the ultrasounds and other tests that were conducted every two weeks, and at one point, one indicated that she was fast approaching the gestational age limit for obtaining an abortion. “That just wasn’t something I contemplated,” said Michelle. Eventually, the Stevens’ switched doctors and hospitals to include NICU facilities.

The Stevens’ were told to expect total bed rest for Michelle at some point before the delivery. They were not expecting to be told that that time had arrived the day after Christmas, 2012, when Michelle was only 25 weeks pregnant. Tests showed that little Emily was feeding her uterine environment instead of being fed by it. Complete hospital bed rest, monitoring and medications helped the situation, but three weeks later, when the nurturing flow again reversed, doctors decided that her best chance for survival was in the outside world, and a Caesarian-section brought Emily Marie Stevens into the world.

And survive she has. “She was a fighter in a hostile environment before she was born,” said Michelle proudly, “and she just keeps on.” A visit to the Stevens home in Herndon and a meeting with Miss Emily herself proved a testament to that statement. Although quite petite for her age, throughout the interview Emily was a bundle of friendly energy, happy to show off her many toys, books and accessories, and more than willing to do a bit of lap-climbing to get better acquainted. All the while trailed by her “big brother” Bentley, the family’s Shih-Tzu-poodle.

Despite daily progress, the challenges for Emily and her parents continue. In the beginning, keeping compromised-immune system Emily safe from potential illness meant she and her now-stay-at-home mom were mostly house-bound. Medication regimes had to be adhered to. Reflux damage meant that Emily’s diet was – and still is - mostly a specialized formula. Because she is frequently disinterested in food, and because helping her gain weight is of the utmost importance, Michelle feeds Emily every 2 1/2 hours. A few solids are being introduced, but Emily is not tolerant of many food changes. A team of physicians, therapists and a nutritionist are required to help bring Emily closer to the developmental milestones of her peers.

How does Michelle cope with the role she describes as “Vice President of Childhood Development at the Stevens household?” “Of course, nothing would be possible without the support of my husband, my family, my in-laws, friends and all of the caring medical providers. Then there is Graham’s Foundation.” (Graham’s Foundation is an organization that raises awareness about the issues related to prematurity and offers support and resources for the families of premature children. Michelle and Craig received some parent-to-parent advice and support through Graham’s Foundation via their website at grahamsfoundation.org). “But I felt I had to do something more,” Michelle explained. And she did.

FIRST, Michelle started her blog, preemieblessings.com. “It’s kind of random, but I write about the things that we encountered, some of the challenges and some of the solutions. I guess I just want other preemie parents to know there are others out there who understand what they go through every day. And I ask for their ideas, how they have handled certain situations.” Michelle also says that her writings are a tribute to her own “preemie blessing.” “She’s such a special little girl. I wanted to track her journey for her.”

But even her blog is not enough for Michelle. Somewhere along the way she decide to write a book about her family’s preemie experience. Published this spring, “Bentley’s Preemie Blessing” is told from the perspective of the family pooch, describing what takes place as Bentley anxiously awaits the arrival of his new little “sister.” Written with even young non-readers in mind, the book is intended to help children understand their own journeys with prematurity and to give siblings, family and friends a greater understanding of the prematurity and NICU experience. “Emily truly is a blessing, and an inspiration. It just felt right to share her story,” said Michelle.

Michelle welcomes visitors to her Preemie Blessings Facebook page and her blog at www.preemieblessings.com. “Bentley’s Preemie Blessing” can be purchased through her website or on Amazon, and Michelle tells us that she, Emily and Bentley are giving serious thought to the book’s sequel as the family continues its preemie blessing adventure.