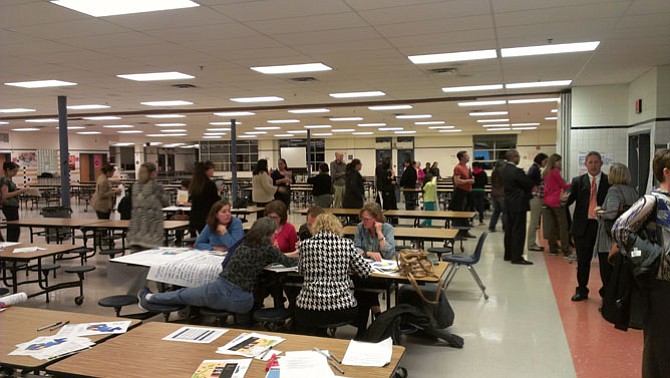 Dozens of parents turned out in the cafeteria of Hayfield Secondary School to learn about and discuss the Fairfax County Capital Improvement Plan and its effects on Region 3. Photo by Tim Peterson. 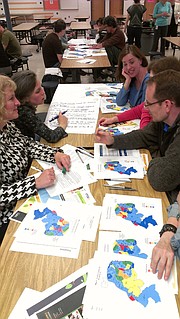 In a breakout session, parents and community members debated pros and cons of building a new elementary school off Route 1 to serve the West Potomac and Mount Vernon pyramids versus reopening Virginia Hills to relieve overcrowding in the Edison and West Potomac pyramids.

Mount Vernon residents Cathy Hosek and Shelly Good-Cook spent their Wednesday night in the Hayfield Secondary School cafeteria, engaging in discussion about how to improve their area schools and community.

After Fairfax County Public Schools adopted its Capital Improvement Plan for Fiscal Years 2016-2020 in January this year, the school system has been working to engage the community more in explaining the planning projects for addressing existing and projected facilities needs.

April 8 at Hayfield was the third of four community engagement meetings where School Board chairman Tammy Derenak Kaufax and members of county staff explained some of the facilities and enrollment challenges and planned programs addressed in the Capital Improvement Plan for Region 3 (Edison, Hayfield, Lee, Mount Vernon and West Potomac pyramids). Mount Vernon District School Board representative Dan Storck also gave remarks at the Hayfield meeting.

According to Storck, schools in the Mount Vernon area will receive $150 million for renovations and facilities improvements over the next four years. This meeting was meant to both explain some of the options for using that funding and hear community feedback on what projects and school programs citizens and parents feel are most important.

“The key issue is overcrowding,” said Hosek. “The Mount Vernon community has been underserved.”

Two primary options proposed include reopening Virginia Hills to relieve overcrowding in the Edison and West Potomac pyramids, and building a new elementary school in the Mount Vernon Woods-Riverside area off Route 1 to serve the West Potomac and Mount Vernon pyramids.

Hosek was more in favor of the new school, calling the alternative proposed renovation a “Band-Aid.”

“Nobody looks at this area, why?” said Good-Cook, who lives in the Riverside Estates area and believes the schools are a major factor in retaining and attracting residents. “A lot of my neighbors leave and go to other areas. We’d rather draw people in than have them turned away.”

Kaufax said the sessions are meant as a valuable brainstorming opportunity for the school system to feel the pulse of the community.

“We thought this is the right time to consider ‘blue sky’ project options,” she said. “Maybe repurpose an existing school to make another governor’s school?

After the final community engagement meeting on April 15 at Walt Whitman Middle School, Derenak Kaufax said, staff will “synthesize” all the written comments and ideas from the four meetings and post the results on the school system’s website.