How one senior in Arlington spends his “retirement.” 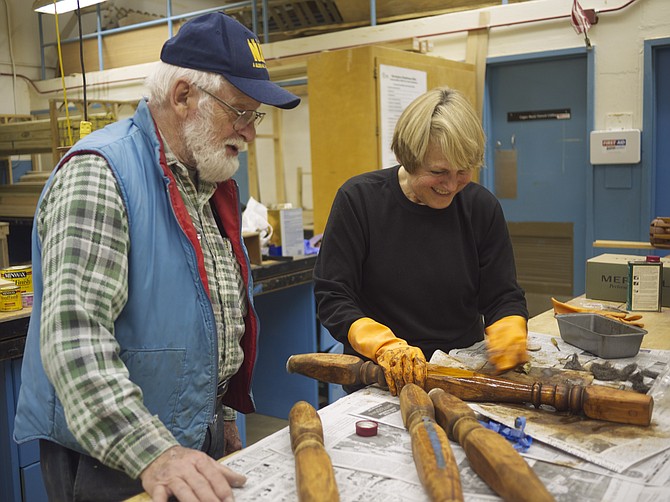 Paul Dietz wears a quilted vest over a well worn plaid flannel shirt. A badge about scouting is on his sleeve. His uniform of baseball cap, work shoes, and pockets full of tools is topped off by a full white beard and the twinkly eyes to go with it. Dietz is “retired” at 75, but not a lot of grass grows under his feet. He runs Diehl’s Honey Farm, located on a quiet street in North Arlington. He teaches. He haunts the local auctions for bargains. He helps out at church, and he adores old organs and organ music.

Dietz moved to Arlington from Michigan in 1967, working for the U.S. Navy at Patuxent River.

Paul Dietz carries packets of bees to a resident.

He bought his house in 1972 and raised his children here, and they raised their children here in turn. Retired from one of his latest roles, school bus driver, Dietz teaches woodworking at the Career Center through the Arlington County Adult Education system. He also teaches beekeeping there, and is often seen at county fairs and shows, reminding residents to protect bees and encouraging them to house them in wooden boxes in their yards.

Dietz drives through Arlington on his way to drop off a few packets of bees to one of his new proteges who lives off Pershing Avenue. He looks at Arlington County as a bee might: the cemetery along Route 50? Lots of flowers. The silver maples just coming into bud? Delicious pollen for his newly arrived bees. Recently he drove 12 hours down to Georgia to pick up 30 packages of bees. He had gotten the call at 6 p.m. from the bee farm: the bees are ready. With no time to waste, he and “another old timer” hopped in the truck and drove down, getting there at 6:30 in the morning, loading the bees, catching a nap, and coming home. They had six hours of sleep in 48 hours.

Each package has 20,000 bees, the equivalent of three pounds, buzzing so loud it sounds like a fan on “high.” Paul delivers them to his clients, local residents who like having bees in their backyards because of the environmental impact and favorable pollination conditions for their gardens.

“You can tell the difference right away: the garden with bees nearby is lush and productive,” he said. One of his better known beekeepers is Arlington County Superintendent of Schools Dr. Patrick Murphy. Murphy got interested in bees when Dietz was still a school bus driver. He learned about bees from Dietz, and got hooked. Dietz says Murphy is “Pat” when they are talking about bees, and “Dr. Murphy” when they aren’t. Dietz will deliver 10 packages of bees to Murphy from this trip to Georgia.

As he drives through North Arlington, he stops in to check on a hive he installed last year, walking to the backyard and greeting the owner. As they stand together admiring the bees returning to the hive, they talk about who has died, who moved, who stays active in teaching, and who has bees now.

Paul Dietz shows a new beekeeper how to load a packet of 20,000 bees into his new hive.

When he isn’t keeping bees, Dietz is a familiar figure in other parts of the county, checking building sites for wood that might end up in the trash. He was just offered the roof of a house being taken down on Military Road: he spoke lovingly of the load of lumber he would be able to take home, once he figured out how to get it hauled. Where others saw junk, he saw 2x4’s he could use in any of his many projects or to make new hives. He cruises the auctions and antique fairs outside the beltway. One week he found an old sewing machine and its stand, for about $6. A bookcase for $3. Behind every piece of used furniture, Dietz sees potential. In his woodworking class he helps local residents discover the beauty lurking behind an old paint-covered chair, or how to restore a scratched table.

Dietz also helps out at the Heidelberg Bakery, and every Christmas, he plays Santa at the bakery and at local parks with his white beard and grandfatherly smile. He also helps maintain the observation bee hive at Potomac Overlook Park. Dietz says they used to have a badge the Boy Scouts could do on bee keeping, but they got rid of all the agricultural badges. He sighed.

As he tumbles the 20,000 bees into a new hive for the owner, the bees tumble like worms out of a bucket, and then flying around his head and uncovered hands, Dietz chuckled as he told about his bees in downtown Washington. He had talked the pastor at his church, a flat roofed church at Fourth Street, Northwest, into keeping a hive on the roof. The pastor finished his sermon with some announcements: he told his parishioners with a big smile that they should give a warm welcome to the new members of the congregation — all 20,000 of them.