Deadline for offers on the surplus land is Sept. 1. 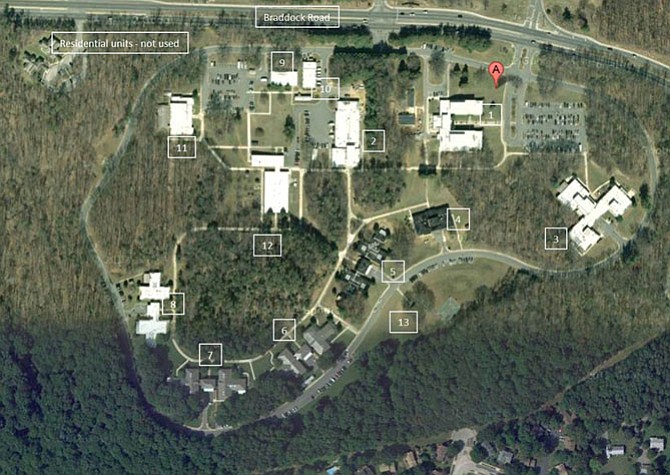 The Northern Virginia Training Center spreads over 80 acres along Braddock Road, including facilities for administration, food service, programs, residences, a warehouse, transportation and therapy. Image courtesy of the Virginia Department of Behavioral Health and Developmental Services

The Northern Virginia Training Center on Braddock Road is scheduled to close in March 2016.

Potential buyers have until September to make their offers to purchase the roughly 80 acres of property along Braddock Road where the Northern Virginia Training Center currently sits.

The Commonwealth of Virginia owns the property; the training center has been a state-operated facility for people with mental or physical disabilities since opening in 1973.

Fairfax County, which has expressed interest in obtaining the property, isn’t planning to meet that deadline, according to Supervisor John Cook (R-Braddock).

“Our thoughts all along had been the county, working with some partners to do some interesting thing at the site that would both be for public benefit and raise some revenue through private development,” Cook said. “We just can’t move that fast.”

However, in July, the county still put out its own “request for expressions of interest,” for potential development partners, according to Board of Supervisors chairman Sharon Bulova. That request is also linked to the main advertisement for the training center property.

“We get to find out who might be out there who’s interested in partnering with Fairfax County,” Bulova said, “to build something or to establish something at the training center property. What is most attractive and beneficial to the county is what we’re looking for.”

A 2012 SETTLEMENT between Virginia and the Department of Justice resulted in the State deciding to close the majority of its five original training centers offering that same type of service.

At the time, the Northern Virginia center had 152 residents, who then began a process of being discharged to a combination of group homes, personal homes, the remaining training centers or other care-providing alternatives. The Braddock Road facility is scheduled to be closed by March of 2016.

As of print time, the total number of remaining residents is 55, according to Virginia Department of Behavioral Health and Developmental Services communications director Maria Reppas.

“There are 35 families who have confirmed their choice of a community home,” Reppas said in an email. “The remaining families are in process of exploring options and making final decisions. There are three families who have opted to stay in a training center.”

Once the residents have all left the training center, the property is considered “surplus” by the state and available for sale. It went on the market May 22, 2015, via the contracted broker Divaris Real Estate, Inc.

Dena Potter with the Virginia Department of General Services, the group overseeing the sale, said in an email the next step after the Sept. 1 deadline is to “review the offers received and enter into negotiations with the prospective buyer whose proposal represents the best value for the Commonwealth.”

POTTERS SAID THE PROPERTY has been appraised, but would not release the value during marketing and negotiations.

“There is no stated asking price,” she said. “Statute requires that the Commonwealth receive at a minimum the fair market value for the property but we will strive for the most competitive value the market will bear.”

Cook said the value of the property to potential buyers weighs heavily on its zoning status. The land is zoned R1 for light residential and designated in the county’s comprehensive plan as a government facility, so any substantial redevelopment effort would require rezoning and an amendment to the comprehensive plan.

And he figures most potential buyers would only sign on with assurance they have those changes worked out.

“Any entity that would buy it outright without conditions — good luck,” Cook said. “If it doesn’t pan out, they’re the proud owner of institutionally planned land.”

Which is why the county hasn’t pulled its call for a developer partner, despite not intending to make the state’s deadline.

If the county were to somehow acquire the land with a partner or partners, Cook and Bulova both see the potential for a variety of uses, including residential development.

“I would like to see some benefit for the population that has been living at the training center,” Bulova said, “so it would be a shame to lose some of the amenities that they’ve been able to receive, for instance, some medical care and therapeutic care.”

Cook also envisions a workforce education center for high school students, a public park, retail development like a micro town center, an assisted living facility and group homes for people with disabilities — the kind some current residents of the training center are considering for their next home.

“It’s a large site,” Cook said. “I would hate to see the site just become a bunch of houses and nothing else, to lose the opportunity to have some other things that would benefit the greater community there.”

Regardless, any change to the zoning or comprehensive plan would require “extensive community involvement,” according to Cook. The process could take the better part of a year, if not 18 months, Cook said.