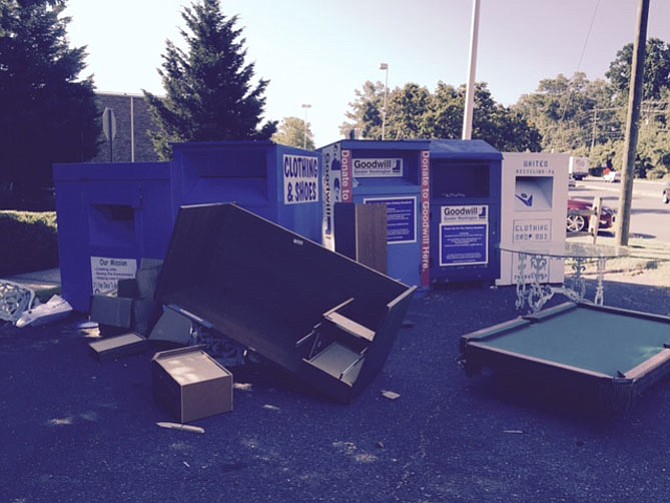 Desks, pool tables and kitchen tables are among the household items Nicole Hudak has seen dumped in front of clothing and book donation bins near the corner of Lee Chapel and Old Keene Mill Roads. Photo courtesy of Nicole Hudak

Burke resident Nicole Hudak didn’t think much of it when she would see extraneous items left in front of Goodwill and Better World Recycling clothing donation bins near the corner of Old Keene Mill and Lee Chapel Roads.

But since she walks her dog past the corner daily, she noticed immediately when the items grew in size and quantity.

“I started seeing more and more stuff: a pool table, couches, mattresses,” she said. “This is ridiculous. The sign on the bin clearly says clothes and shoes, it doesn’t say table and chairs.”

Hudak admits the items usually get picked up at some point -- by whom she doesn’t know -- but there’s always more to replace it the next day -- again, it’s not clear who’s doing the dumping.

To find out who is responsible for maintaining the area, Hudak contacted both Fairfax County and the Virginia Department of Transportation, who informed her the corner is not within the jurisdiction of the state.

She made contact with an investigator in the Fairfax County Department of Code Compliance, who she said told her the dumping was indeed a violation.

THE QUESTION remained: What to do about it?

Hudak said the investigator asked her what she would like to see done. They discussed having the property owner put up signs saying, “No Dumping Allowed” or just having the bins removed altogether.

“Whatever you can do to remedy the situation, that’s fine with me,” said Hudak. “There’s not an eyesore, but it’s people taking advantage, unloading whatever right there.”

Heath Eddy with the Fairfax Department of Planning and Zoning said this problem isn’t localized to Burke. There was previously a higher concentration of donation sites and dumps along the Route 1 Corridor. County staff have been discussing the issue for the last five to six years, he said.

Though the Department of Code Compliance takes on cases where someone complains about dumping by these bins, Eddy said so far it has remained a problem largely because there’s not a precise set of standards for the bins themselves: where they can be placed, how many can be in one spot, how long they’re allowed to sit unattended.

Eddy knows of one organization that has around 100 bins spread across Fairfax County and estimates there could be hundreds more through other donation groups.

To address the problem, Planning and Zoning has already adopted a resolution to create just such a set of standards. In October, the department will send a zoning ordinance amendment to the Board of Supervisors for approval that allows the Code Compliance officials to be more aggressive with how they handle complaints about dumping at the bins.

“One problem is these boxes appear out of nowhere and the property owners end up inheriting a problem they didn’t even want,” Eddy said. “It’s a charity item, but at the same time, they don’t have the right to leave a box or not have it maintained enough.”

Jim Ciampini, a Department of Code Compliance supervisor, estimates his office works on around ten cases of dumping at donation bins each year.

UNDER THE CURRENT zoning ordinance, the bins are defined as “accessory structures” to a given property, Ciampini said, but the proposed amendment would more specifically define what the bins are.

With regards to the specific case Hudak has complained about, Ciampini said the bins are in violation of the current zoning district. They’re located on required parking spaces and not set far back enough on the property. Then there’s the overflowing problem.

Ciampini said both the property owner and and owner of the bins have been contacted about complying with the code.

In the mean time, Hudak sends the investigator an email with a photo more or less every day she sees new items dumped at the site in Burke. It’s “what’s here today,” she said. “For me now, you just kind of have to accept it.”

For residents interested in having large items like old mattresses or other used furniture picked up directly from their home, Jim Ciampini says to contact the agency that regularly picks up your trash and arrange a special pickup time.