Alexandria: TSA Transports out of Arlington 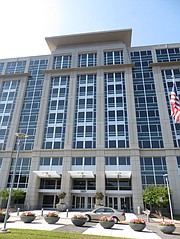 The TSA’s new headquarters at the Victory Center in Alexandria.

“If you had a private sector backfill for that building, that would be a good thing, but Arlington overall is struggling with vacancy rates and this certainly isn’t going to help that.”

Alexandria — While Alexandria celebrates the recent Transportation Security Administration’s decision to move to West Eisenhower, Arlington struggles to recover from another blow to the county’s office vacancies. The 3,800-person headquarters will leave its Arlington location in 2018 to settle into the Victory Center.

Stephanie Landrum, president and CEO of the Alexandria Economic Development Partnership, celebrated the move as jump starting the city’s plans to revitalize West Eisenhower. Less than a week after the announcement, Landrum said she’d already gotten phone calls from contractors possibly interested in moving into the area.

“The Federal Government is a very stable office tenant,” Landrum said. “The lease is for 15 years, but the average stay for a federal entity is 40 years.”

But the TSA was not as stable an office tenant for Arlington, who now faces the task of filling the half a million square feet of office space at the TSA’s current 12th Street headquarters in Pentagon City.

“Obviously it’s disappointing,” said Marc McCauley, director of the Real Estate Development Group within Arlington Economic Development . “We aggressively went after the deal, but it all came down to cost.”

But Landrum dismissed concerns over the Alexandria facing similar instability.

“The TSA is a teenager,” Landrum said. “It was founded after 9/11. It’s in its formative years, and this will be the first real headquarters they’ve ever had. The Arlington location was put together during the emergency, but this headquarters allows them to design a facility based on their operations. It’s like they were subletting an apartment. They’ve pieced things together, and now they’re ready to move into their new home.”

Landrum also said that Alexandria has specifically made a point of drawing in diversified federal agencies.

“The Patent and Trademark Office (PTO) is an enterprise agency,” said Landrum. “They charge fees for the work they do and so they build up a budget. That’s how they fund their operations. The PTO was not impacted by sequester, they generate their own revenue. The National Science Foundation, from a federal agency standpoint, is something that’s incredibly attractive because of the spin-off activities. It’s unlike any other federal entity.”

Landrum said the TSA is also considered a very stable federal agency, but said the city had additional motivations for courting the shift.

“As we look at the TSA, the reason we were aggressive in trying to land this is because of the location,” said Landrum. “[The Victory Center] been sitting empty for 10 years in an industrial area. We need someone to go in and be the catalyst. For the city, that’s an amazing investment. This should accelerate development by 15 years.”

According to Landrum, the only potential use for that building was as a federal agency.

“There’s no other business that was going into that building,” said Landrum. “Our options were: land a federal agency, let it sit empty, or tear it down.”

Landrum said that a site in the Hoffman area of Eisenhower, near the Patent and Trademark Office and almost directly adjacent to the National Science Foundation, was also considered. However, more incentives were offered for the West Eisenhower site in hopes of bringing additional development to that part of the city.

The TSA headquarters will receive a $23 million tax abatement, or $1.5 million annually for the duration of the 15-year lease. However, according to City Manager Mark Jinks, the city still anticipates bringing in $1.6 million every year from the site, or $25 million over the course of the 15-year lease.

“The City Council proposed a tax incentive, a partial real estate tax abatement,” said Jinks. “[It’s] a different structure but similar to National Science Foundation. It helped the project become feasible at a low rental rate. Over 15 years, many of those people will move [to Alexandria], and they will have dollars to spend. As we work on redevelopment of Landmark Mall, the mall will be on the road as they drive there. While these are not new jobs to the region, there is an economic benefit to the city to bringing new jobs to the city.”

But the impact may not be as heavy as Alexandrians and Arlingtonians alternatively hope and fear, at least not immediately.

“From a regional standpoint, it doesn’t really matter,” said Dr. Terry Clower from George Mason University’s Center for Regional Analysis. “They’re moving about eight miles down the road. The new location is closer to the Van Dorn Metro, but it’s going to be the same employees.”

Clower acknowledged that new people would move in over time, but said it wasn’t enough to constitute a shift in labor force. Clower also noted that, with Alexandria’s lack of affordable housing, it’s questionable whether the majority of TSA employees at the building would consider living in Alexandria. However, Clower recognized that there were other benefits to Alexandria besides additional employment

“It is a signature government agency occupying a vacant building,” said Clower. “From Alexandria’s perspective, that is a good thing… Sometimes in development, the best way to draw a crowd is to already have a lot of people.”

The Victory Center has been empty since 2005, when Army Material Command command moved from the Victory Center to Fort Belvoir. The property owners, Eisenhower Real Estate Holdings, LLC, will provide $50 million in property improvements before the TSA officially moves into the building in 2018.

Clower noted that the move is still a major loss to Arlington, even though the county will still maintain those jobs over the next few years.

“Certainly Arlington didn’t want to lose that,” said Clower. “If you had a private sector backfill for that building, that would be a good thing, but Arlington overall is struggling with vacancy rates and this certainly isn’t going to help that.”