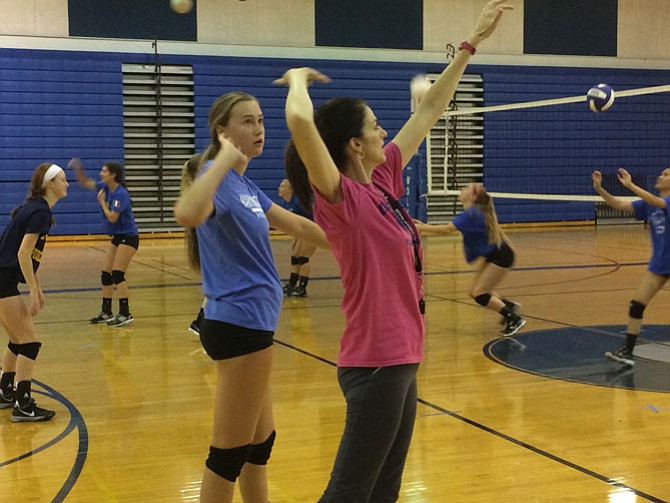 This year, however, Nancy Nixon was hired as the head coach, and her players believe that this could be the first step to changing the Wolverines’ reputation.

“[Nixon] is very well educated in volleyball,” rising junior outside hitter Lindsay Cullen said. “She always has sources, so when we ask ‘Why are we doing this?’ she has an article or a scientist that proved that it was right and can help us. She’s very focused on not only making us a better team, but better individual players as well. She understands that it’s not just six people on the court, it’s six different people.”

Nixon served as West Potomac’s junior varsity coach for two years in 2012 and 2013, and worked as an assistant coach at Northern Virginia Community College last fall.

“Coach Nixon was my JV coach,” Cullen said. “Having worked with her in the past, it’s easier for some of us to understand her philosophy and know where she’s coming from.”

Hoping to improve the team’s record by increasing the strength of her players, Nixon implemented a more intense practice schedule and conditioning program than West Potomac has had in past years. It’s not uncommon for regular practices to run from 9 a.m. to 2 p.m., with specialized practices for certain positions continuing until 3 on some days.

“Most practices during the summer run at least five hours long. We do a lot of work to be as good as we can be,” rising sophomore setter Rebekah Jenne said. “We do a lot of conditioning for our legs and arms in order to help our stability and make us consistent players.”

On the court, Nixon plans to keep everything as simple as possible in order to succeed. With several underclassmen in starting positions, she wants to ensure they learn “correct techniques” and “understand the game.”

“We are working on the basics and developing our skills,” Nixon said. “Technique is our focus.”

Where other teams may have superior skills, the Wolverines hope to be smarter.

“We aren’t as strong as other teams, so we have to hustle and be smarter than them to make up for it,” rising senior outside hitter Sydney Nixon, the coach’s daughter, said. “We have to put the ball where the other team isn’t and not try to do too much.”

Jenne and rising sophomore setter Ashlyn Hendrix are two of the underclassmen who will be expected to step up this season. Both in their first year on varsity, they have been doing a lot of work to catch up to their teammates. Nixon, however, expects that the two setters will be one of the strengths of the team.

“There’s a lot of pressure on us as sophomores on varsity to be able to set for almost every hitter on the court,” Jenne said.

Some of the more experienced players on the team are Cullen and Nixon. With several more seasons of volleyball experience under their belts, Coach Nixon expects that they will be leaders on the court.

“Having my mom as a coach is different than we’re at home,” Nixon said. “It’s a different atmosphere here. I respect her as a coach and she looks at me as one of her players, not her kid, and she expects a lot from me.”

The Wolverines will begin their season at home on Aug. 27 against Falls Church.