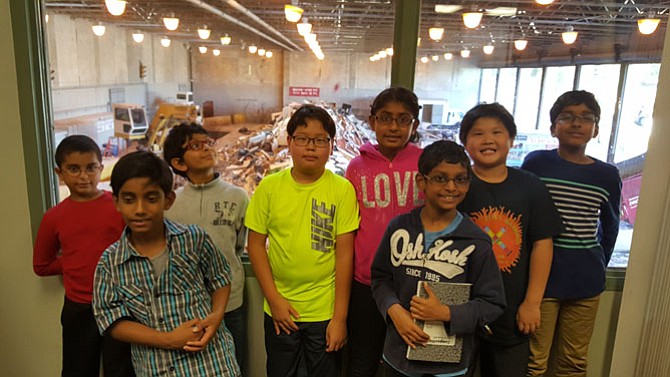 As part of the FLL activity, these fourth graders from Poplar Tree ES have started researching about the plastic recycling issue and based on their research, they believe that people in America don’t recycle plastic enough …. and that poses a major environmental issue and results in ecosystem imbalance.

The students decided the solution to this problem is to educate people and persuade them to recycle plastic more. Motivated by the encouragement they got from the principals of Poplar Tree Elementary school, Team AMP has set out to reach to as many people as possible to explain the benefits of plastic recycling. More information about team AMP’s research and their solution can be found at:

As part of the research, they have visited the Fairfax County Recycling plant and the American Recycling center in Manassas. Thanks to staff at these recycling plants, the students learned about the plastic recycling process. Then, they started researching about plastic and problems caused by excessive usage of plastic. Here is some information they learned about plastic, its usage, and benefits of recycling:

After their research, they then surveyed about 40 people in Chantilly area about plastic recycling and found that more than 70 percent of people do not know enough about plastic recycling. After brainstorming sessions under the guidance of their coach, these children came to the conclusion that educating people is the best possible solution.

As part of the community outreach, team AMP is visiting schools, libraries, retailers in the area to spread the word. So far they have visited Poplar Tree Elementary School, Chantilly Public Library, Costco, Greenbriar West Elementary School and Target. Some of these institutions have agreed to let team AMP post their flyer on their premises to promote recycling. Team AMP is also using social media such as Facebook, Twitter and YouTube.