In Fairfax, A Dance for All
Votes

In Fairfax, A Dance for All 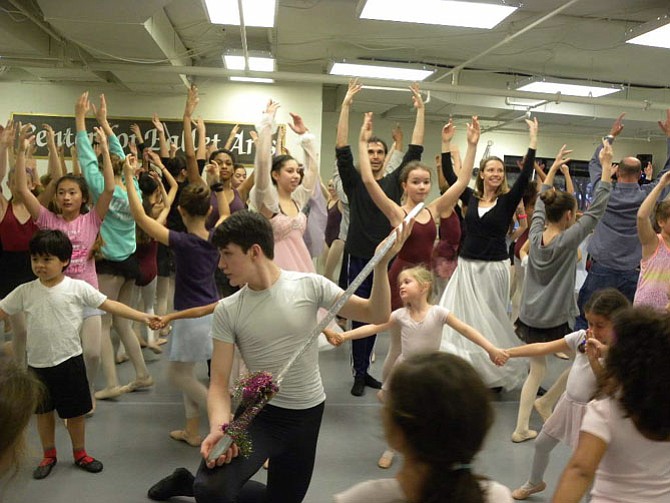 The ensemble rehearses at The Center for Ballet Arts’ new studio in Fairfax for its production of “Nutcracker in a Nutshell” playing Saturday and Sunday, Dec. 19 and 20 at NVCC Alexandria’s Schlesinger Concert Hall. Photo by Abigail Constantino. 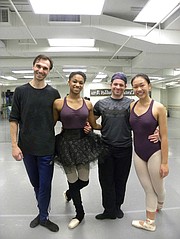 From left, The Center for Ballet Arts’ “Nutcracker in a Nutshell” leads Aleksey Kudrin, Morgan Hobson, Dustin Kimball and Sherry Feng will entertain audiences with their spin on the classic holiday ballet at the Schlesinger Concert Hall in Alexandria, Saturday and Sunday, Dec. 19 and 20. 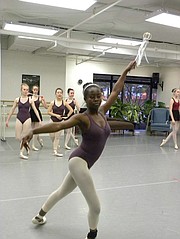 Samantha Dawkins, a student at Fairfax High School, practices her steps for The Center for Ballet Arts’ “Nutcracker in a Nutshell.” 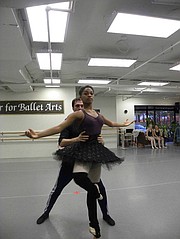 Cavalier Aleksey Kudrin lifts Morgan Hobson, who plays the Sugar Plum Fairy, in The Center for Ballet Arts’ “Nutcracker in a Nutshell.” 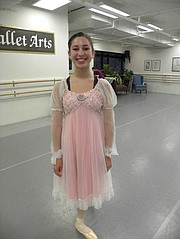 Alexis Singer, 14, a student at Rachel Carson Middle School, plays Clara in The Center for Ballet Arts’ production of “Nutcracker in a Nutshell.”

Tchaikovsky’s “The Nutcracker” is literally a child’s dream, with visions of toys coming to life, anthropomorphic creatures and the supernatural manifesting in vivid detail on stage. And like most dreams, it has an unsettling sense of the uncanny.

The Center for Ballet Arts is presenting a family-friendly version of the ballet called “Nutcracker in a Nutshell” on Saturday and Sunday, Dec. 19 and 20 at Rachel Schlesinger Concert Hall in Alexandria. The show is only 75 minutes long, a good chunk of time to expect children to stay focused.

But everyone will be transfixed by the dancers who play the Sugar Plum Fairy. Morgan Hobson and Sherry Feng, of Fairfax, share the lead. Benn Savage, who runs The Center for Ballet Arts with Debra Savage, described Feng and Hobson as special.

Hobson started dance about 10 years ago. Her mother Jacy said that Morgan started to dance shortly after she started walking. “I’d put music in the family room and she would always dance.”

She first enrolled in ballet, modern and tap when she was three but the classes were too long and too much. She played soccer for a while instead. But her love of dance never went away.

Jacy reintroduced it and took Morgan to a studio in Reston. A friend, whose daughter danced at The Center for Ballet Arts, told her about the studio, which was a few blocks from her house in Fairfax. Morgan has been with the Savages for nine years.

Feng’s proclivity for dance was discovered on the soccer field when she was about six years old. “Whenever the ball would get near me, I would just run away to the other side of the field and start dancing.” So, her mom put her in dance classes.

Feng is Asian American and Hobson is African American. They are not the traditional image of the role they share. “Race doesn’t have any monopoly on beauty,” said Benn Savage.

Feng said that minority representation in ballet is a big issue and that there is a greater push for diversity in professional ballet companies. But ultimately, she said, “ballet is something that speaks to everyone. You don’t have to be a certain race to appreciate the art of dance.”

Jacy said her daughter had never even heard of Copeland until about two years ago, but seeing another African American dancer enhanced her daughter’s passion for dance. Jacy and Morgan saw Copeland perform the Sugar Plum Fairy piece a year ago and even met the dancer.

Although Feng and Hobson spend about 10 to 15 hours a week dancing, they cultivate other interests outside the studio.

Hobson, a junior at Fairfax High School, is interested in STEM. She is taking AP Physics and Chemistry. She correlated ballet and her interest in STEM subjects, thusly, “Physics is the movement and motion. Dance is like that, too. Physics is the science behind why you’re moving and then dance is the creativity and emotional aspects of why you’re doing it.”

Feng, a senior at Chantilly High School, is interested in economics, pre-law and environmental engineering.

TIME MANAGEMENT is key for both, something they gleaned from ballet.

“It keeps them focused,” said Benn Savage. “They look like adults until they open their mouths and then they talk about high school things.”

Hobson said that recital invitations to friends sometimes falls flat, unless she posts videos on Instagram, “and then they want to come to recitals.”

Feng agreed, “I don’t think they really understand,” but she said that she has been lucky to have supportive friends who appreciate what she does even though they are not dancers.

“Nutcracker in a Nutshell”