I-66 Improvements Draw Crowd in Oakton 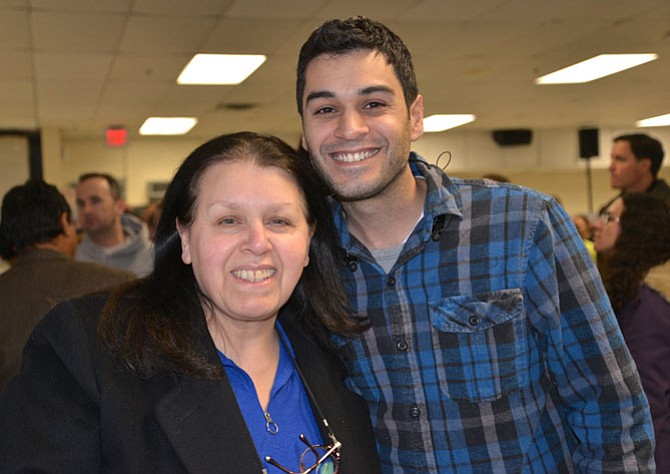 Amina Abdullah and her son Piran had a vested interest in attending the I-66 informational meeting. With their contractor Richard Lensis in tow (“I’m just here for moral support,” said Lensis) the Abdullahs located their plot on the Fairfax proposal section. “We’ve been working hard and saving for a couple of years to build a garage for our house,” said Mrs. Abdullah. “We are pretty close to I-66. I was just worried that after all of this, maybe we couldn’t build it or maybe we would have to move it or something.” Lensis and the I-66 Project team member took a good look at the map and were able to reassure the Abdullahs that the improvements would not impact their construction plans. Photo by Andrea Worker.

I-66 Improvements Draw Crowd in Oakton

The Virginia Department of Transportation (VDOT) in partnership with the Virginia Department of Rail and Public Transportation (DRPT) recently held several informational meetings on the “I-66 Outside the Beltway Improvements Project” to give the public the opportunity to better visualize its scope and ask questions of the people really in the know. One of these meetings was held at Oakton High School on Feb. 3 and drew a crowd of several hundred to the school cafeteria to learn more about the project that covers a 25 mile path from the 495 Beltway to Route 15 in Haymarket.

The meeting room was bordered by large-scale aerial-view maps depicting two alternative design suggestions for each of nine sections – I-495, Dunn Loring, Vienna, Fairfax, Fair Lakes, Centreville, Manassas, Gainesville and Haymarket. Representatives from the various agencies involved manned each section to talk about the proposals and to answer questions. Other displays addressed Environmental issues, Public-Private Partnerships (P3), Right of Ways, Access Points and Interchanges, and proposed Express Lane Access and Park and Ride facilities. There was also a “Comments Table” where attendees were encouraged to offer their feedback and provide information regarding their personal usage patterns and preferences along I-66.

Following an “Open House” hour, Renee Hamilton, VDOT Deputy District Administrator for the Northern Virginia District made the formal presentation, starting with the urgent need for improvements to this key travel artery. “We continue, fortunately, to experience tremendous job and population growth in our region,” she said. “By 2040 it is projected that congestion time on I-66 will increase to 8 – 10 hours per day if nothing is done.” Hamilton also cited safety concerns with the large number of vehicles and the less than adequate entrances and exits to the thoroughfare. She took the participants back in time, explaining the history, the studies, and the process to date, describing how 10 concepts yielded some 47 scenarios to form the proposals currently on the table.

THE GOALS of the project are simple, yet challengingly complex:

Before closing, panel members from VDOT, DRPT and the P3 group took questions from the floor. The topics were wide-ranging, but three in particular seemed to repeat and resonate with the audience, judging by their applause. One: How can the project be successful unless congestion is addressed on I-66 in its entirety, not just outside the Beltway? Two: Why is there not more emphasis on a Metro solution, rather than just adding lanes and express travel options? And three: What about accommodation for cyclists and foot traffic across the highway? Question three was handled to the apparent satisfaction of the crowd, with representatives stating that the project group was working with the local jurisdictions to include the best improvements for cyclists and pedestrians. Answers to the first two questions were met with less approval. While the total transportation scene is being contemplated, at this point Metrorail options and work on I-66 inside the Beltway are “separate projects,” according to panelist Young Ho Chang of the I-66 Project Team, and not part of today’s solution alternatives.

WITH A $2-$3 BILLION estimated cost, the probability of tolls, parcel impacts ranging from 223 – 228 and approximately 30 property relocations called for, VDOT and DRPT urge the public to stay informed and keep in contact. “We are committed to transparency, public outreach and working with all groups, especially those who will be most impacted by these changes,” stated Hamilton. Public Hearings will be scheduled in the spring, and VDOT hopes that construction can start in 2017 with the new I-66 fully open to traffic by 2021. A video of the Jan. 29 meeting is available on line at www.transform66.org as well as all of the documents used in the presentations, background information, more details on the project from every aspect and ways to leave feedback or contact project team members.