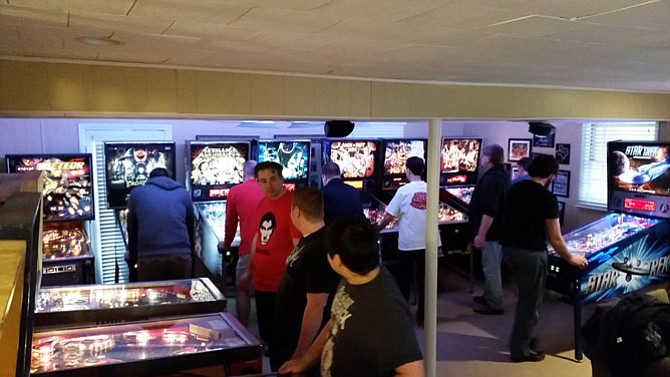 Kevin Stone, "Pinball Kevin," hosted this year's Virginia State pinball championship in his home in McLean. Virginia was one of 33 states that held a simultaneous tournament on Saturday, Feb. 7. Photo contributed 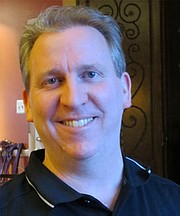 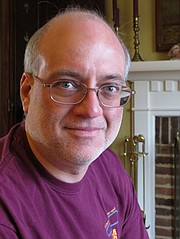 Kevin Stone took out a loan to buy the 15 pinball machines in his McLean basement, the site of this year's Virginia state pinball championship. Virginia was one of 33 states to take part in the simultaneous championships on Saturday, Feb. 7.

Stone's Harlem Globetrotters machine was built in 1979, others from Stern Pinball and Jersey Jack Pinball are contemporaries. One machine cost him $7,200, another cost him $500, he said. "It depends on the bells and whistles."

"I thought, 'I might as well. If I take out a loan now, I'll be able to enjoy them while I pay the loan back,'" said Stone, who is known as "Pinball Kevin."

More than 30,000 players are ranked and more than 2,400 events bounce around the globe annually, according to the International Flipper Pinball Association, which started tournament-tracking nine years ago.

"I'm still shaking. I've got adrenaline pumping," Pinball Kevin said, after losing the first game in the second round to Julie Schober of Great Falls. Schober sent Stone down the chute in the first round in 2014.

This year, Stone got his revenge. "Everyone wants to win," said Stone.

But Pinball Kevin, a Langley graduate, was more than a gracious host; he lost to Austin Mackert, this year's Virginia state champion in the final round of the four-round tournament.

By winning the Virginia trophy, Mackert, 32, of Chantilly, qualified for the National Championship in Las Vegas at the Pinball Hall of Fame on March 26. Mackert lost only two games in his four "best of seven" matches, meaning he won 16 times and lost only twice.

"He played great and deserved the win," said Stone.

THE PINBALL WIZARDS call the stray machines they see at various restaurants and bars "lone wolves."

Mackert calls his sighting of an "Avatar" machine in Manassas when he was doing an errand a "stroke of luck."

"I threw a quarter in there," he said. Afterwards he found himself driving to Manassa just to play the Stern Pinball machine.

Getting better was a simple economic payoff. "When I first played, I would spend $25 to $30 a month for three to five hours of play. Now, I can go in there with about five bucks and play the same amount of time."

Mackert had no idea there was competitive pinball before Pinball Kevin saw him playing and told him he had to come out and play. "You step in your first game and you're nervous, not in a zone, but by the end of the game you're locked in," said Mackert.

Mackert looked at tutorials about some of the machines he knew would be used at this year’s tournament. “Pinball is about making good decisions,” he said.

Pinball Kevin said he approaches everyone he sees playing pinball.

"It's a community of people, you always have a good time," said Stone.

GREAT FALLS couple Joe and Julie Schober have 22 machines at their home.

"We play a lot of pinball," said Julie Schober, the 2014 Virginia state runner-up.

"We play aggressively against each other," he said, adding that he knew he would be happy with whomever won the final match last year.

Schober was hooked on pinball when he was a child; "if I behaved my mother would give me a quarter to play."

His parents gave him his first pinball machine, a machine made out of particle board, the next Christmas. "I played that thing until I literally made it collapse," he said.

When he started playing in a league he found through fspazone.org in College Park, he started getting better, Schober said. "Everybody is so serious about the competition. If it's something you love, you go deeper and deeper."

The two buttons have a multitude of physical repercussions, he said. “It's a game of milliseconds."