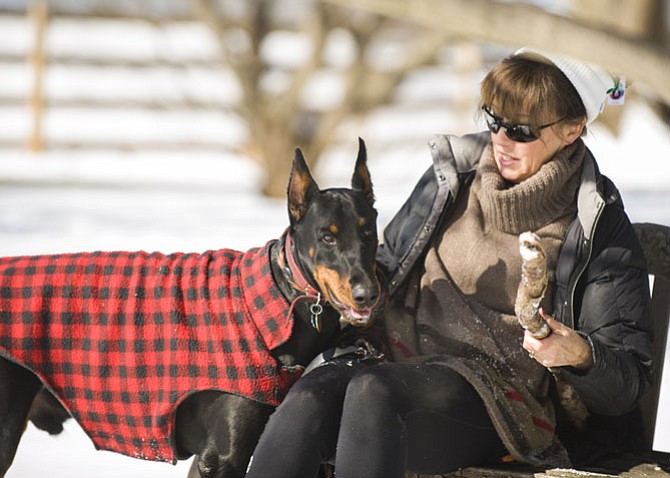 Angela Boyer and her Doberman Marz in a snow day last week in Great Falls. Photos by Patrick Korten 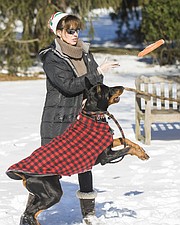 Angela Boyer and her dog Marz. "He's an active, energetic teenager," Boyer says, "and he has a lot of energy to let out when he gets the chance to run outside and play."

I have owned both, and I think Hitchens was right, although he was an atheist, and thus did not believe in "god" or "gods."

Great Falls is filled with pet owners who may not quite worship their pets, but love them dearly all the same. To feature a mere handful here is to do no more than scratch the surface of pet owners in these parts (the pets themselves, of course, are scratching everything else in sight). And while most of our pets are dogs and cats, this is Great Falls after all, and more than a few have horses as well.

Emma Keller is among the horse owners, and her Arabian horse Alex spends his days at Southdown Farm, just down the road from L'Auberge Chez Francois. Emma describes his personality as that of "a giant golden retriever."

Louie is among the smaller dogs so popular in the area, while Angela Boyer's Doberman, named Marz, is at the other end of the spectrum: nearly as tall as she is when he stands up. "He's an active, energetic teenager," Boyer says, "and he has a lot of energy to let out when he get the chance to run outside and play."

Energy is not a word that Ellen Ash would use in the same sentence as Mr. Puss, her 6-year-old Norwegian Forest Cat. "He's a 25 pound bundle of love," she says, and she loves all the extra hair that grows between the pads on his paws. "They almost look like extra toes," Ash marvels.

Harry Truman, who served in Washington as a senator, vice president and president, once said, "If you want a friend in Washington, buy a dog." Well, Harry, my pet is a cat, an orange tabby named Purrcy. A friend found him near a construction site off Colvin Run Road. He's still a kitten, and although some day I suppose that he'll slow down and sleep a lot, right now he's a bundle of energy. He's rather affectionate for a cat, and he's a good friend too.