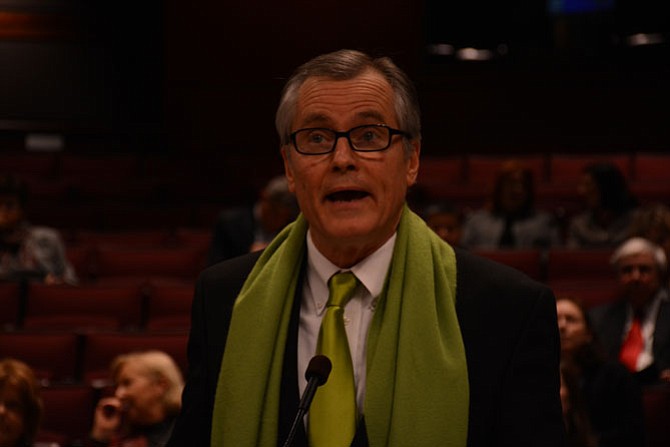 Carey Campbell of Springfield speaks at the Jan. 27 public hearing on proposed Board of Supervisors compensation adjustments. Photo by Tim Peterson.

How should a county supervisor be compensated for his or her service?

That question continues to be up for discussion, as the Fairfax County Board of Supervisors voted unanimously to defer voting on a compensation adjustment that would take effect Jan. 1, 2016.

Two weeks ago, on Jan. 13, Chairman Sharon Bulova brought the adjustment up as a board matter.

ALL SUPERVISORS, including the chair, currently make an annual salary of $75,000. In order to alter that figure, Virginia law states a vote by the supervisors can only take place once every four years and must be within the same year as elections for a new board.

At the Jan. 27 meeting, Bulova reminded those gathered for public hearings that 2015 is that opportunity year, and that a decision must be made before April 15.

The proposal on the floor was increasing annual salaries to $95,000 for board members and $100,000 for the chairman.

“If there is no affirmative vote, the next window wouldn’t be until year 2019, and it wouldn’t be effective until 2020,” said Bulova. “That would’ve been a 12-year span of time.”

Division among board members surfaced on Jan. 13. Pat Herrity (R-Springfield) and Linda Smyth (D-Providence) opposed the measure as poor timing given the county’s budget challenges.

“Now is not the time to be considering raises,” Herrity said two weeks ago. “We’ve increased homeowners’ taxes 14 percent, our residents don’t have the luxury of raising their salary.”

“We’re facing another difficult budget year,” Smyth said on Jan. 27. “I’m concerned about the message something like this sends.”

Those who support the adjustment argued that the current salary doesn’t adequately compensate what they said is the ever more time-consuming role of being a supervisor.

Frey also cited the importance of having more people vie for the office.

“Call it what it is, it’s an anti-competitive position,” he said. “We figured out how to make it work on this salary. The more difficult we make it for others in the community to run, the less competition we have. I just think that’s wrong.”

THREE MEMBERS of the public offered their testimony during the Jan. 27 hearing.

With regards to the salary adjustment, in his rounds, Campbell said he “did not find support for this proposal.”

Bruce Nielson of Fairfax offered his support for the measure. “The first question must be what has taken so long?” he said.

Nielson applauded the job the supervisors do, but decried their salaries falling well below similar positions in neighboring jurisdictions, including council members in Washington, DC, Montgomery County and Prince George’s County.

As the board addressed one motion to adopt the adjustment, Herrity introduced another motion to defer the decision. He said at the previous meeting they had resolved to keep the public record open until March 3.

Frey acknowledged, “I don’t think this issue has caught fire with the public,” referencing the handful of emails he’s received.

“I want to hear more from the community,” she said. “I’ve received very little from my constituents. I’m not there yet.”