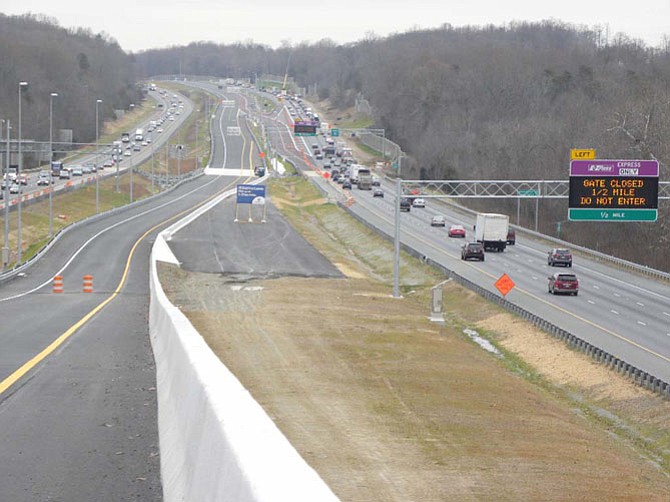 The 95 express lane from the Garrisonville entry point with I-95 N, right and I-95 S, left.

The boy was discovered June 14, unresponsive, at the bottom of a pool in Pirate’s Cove Waterpark at Lorton’s Pohick Bay. At the time lifeguards were clearing the pool for lightning.

Police said the apparent cause of death is drowning. No criminal charges are anticipated.

A jury has convicted former Fort Belvoir resident Lawrence Wayne Reese, 56, of nine offenses including arson, use of fire in commission of another federal offense and multiple counts of fraud related to submission of a fraudulent insurance claim.

Reese owned and operated the “Sub Shop” formerly located on Richmond Highway in Lorton. In February 2015, Reese and his son Lance Terrell Reese were indicted for committing arson and burning the shop down Feb. 6, 2013, a report from the Department of Justice said.

The elder Reese also received help with the crime from Horace Thompson, who has already been tried and convicted in Virginia’s Eastern District.

For his part Lance, also formerly of Fort Belvoir, was convicted of arson and conspiracy to commit arson.

To escape from the burden of the struggling business, Reese destroyed the building and then filed a claim for around $200,000 to his insurance company.

Around the Fourth of July, patriotic celebration throughout the Washington, D.C. metropolitan area comes with heavy gridlock. To help alleviate some of the traffic into, out of and around the region for the holiday weekend, the 95 Express Lanes schedule will be adjusted, according to an Express Lanes spokesperson:

*There are no changes to typical reversal time. The reversal from northbound to southbound starts around 11 a.m., with the southbound lanes open around 1 p.m.

*Reversal of lanes from southbound to northbound is scheduled to begin at midnight. The northbound lanes will open around 2 a.m.

*Reversal from northbound to southbound will begin around 7 p.m. The southbound lanes will open around 9 p.m.

*Lanes will reverse from southbound to northbound at midnight, with the northbound lanes open around 2 a.m.

*There are no changes to typical reversal time. The reversal from northbound to southbound starts around 11 a.m., with the southbound lanes open around 1 p.m.