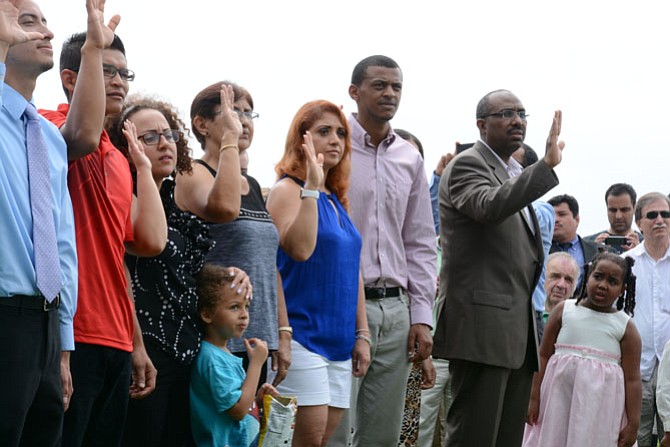 More than 100 people from 45 countries became American citizens at a naturalization ceremony held on the Fourth of July at George Washington’s Mount Vernon. Photo by Tim Peterson.

Journalists Alakbar Raufoglu and his wife Tamara Grigoryeva left their native Azerbaijan because the government was repressing them and their freedom of speech.

“We couldn’t write what we wanted to write,” about their home nation, said Raufoglu. “In media, speech, gathering —it’s all about freedom.”

The couple moved to the United States and were able to obtain green cards. Raufoglu now works for the Turan News Agency covering Azerbaijan and his wife is with Freedom House, an independent watchdog organization. Together they are activists “trying to protect our colleagues from here,” Raufoglu said, who are doing what is a “very high price to pay for more freedom to daily life. Not every citizen is able to taste it.”

After waiting for six years, the couple and their children, who were born in America, are getting to taste more of this country’s freedom: They were among over 100 men and women from 45 different countries who took part in a naturalization ceremony at George Washington’s Mount Vernon on the Fourth of July.

“Voting will be a very big moment for us,” Raufoglu said.

United States Citizen and Immigration Services director León Rodriguez led the group in an oath of allegiance and proclaimed them citizens.

“I’m honored to be the first to address you as ‘My fellow Americans.’” said Rodriguez. “This is the end of one journey but the beginning of another.”

John Brennan, director of the CIA, also addressed the new citizens. “Naturalization gives us extra special meaning,” he said. “You’re Americans by choice. You know what it’s like not to be an American.”

The men encouraged the naturalized men and women to not only enjoy the freedoms America has to offer, but also give back, volunteer and do good in their communities.

George Washington himself made and appearance and said, “Continue to be the beacon light of America that shines forth on a dark world. Celebrate the joy of independence and citizenship.”

Independence Day activities on the estate ran from 9:30 a.m. into the mid afternoon and included Gen. George Washington inspecting a regiment of troops, Benjamin Franklin reading the Declaration of Independence, the Sons of the American Revolution laying a wreath at Washington’s tomb, a concert by the National Concert Band of America and midday fireworks over the Potomac River.