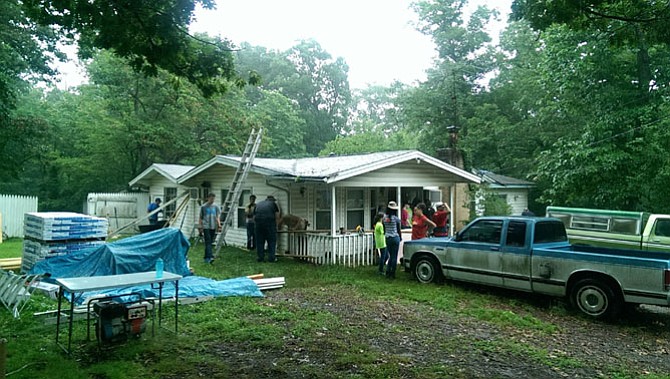 Around 100 youth from all over Virginia are helping repair four houses in Lorton, including yard-clearing, roofing, flooring and other structural work. Photo by Tim Peterson.

A rear room in the house has significant water damage and a collapsed floor. By the end of the week, the Impact team expects to have it fully redone.

Jeff Moten started the week with 31 teenagers on his lawn. Baptist youth from around Virginia arrived at his Lorton property around 9 a.m. on Monday, July 13. By 10, they had cleared much of the natural overgrowth in his front and back yards, begun stripping his home’s roof and removing debris from a rear room where the floor had collapsed.

Moten has lived in the house 45 years, since his family moved there in 1970. Now living with a disability, he’s found it difficult to maintain the home. “I was the type that was always helping someone,” he said. “I’ve had a hard time asking for help.”

While he wouldn’t ask for himself, Moten said his mailman got in touch with Buck Rodgers of Virginia Baptists, who decides which houses will be taken on by “Impact” church youth service camps for repairs.

EACH SUMMER, Baptist youth from around Virginia participate in these local mission trips to repair or rebuild homes for people who need help. Referrals come from churches, the Department of Family Services and nonprofits such as the Lorton Community Action Center. Youth volunteer their time and actually pay to attend the mission trip. The camp also receives funding from the Northstar Church Network.

“We choose based on the amount of need,” said Rodgers, who is from Stafford. “This house is a true Impact project. It looks pretty bad, but I’ve seen worse. The good Lord is teaching us humility and perseverance this morning.”

Though they’re working on four sites in Lorton, all the youth and chaperones are spending the week at First Baptist Church of Springfield. They work from about 9 a.m. to about 4 p.m. each day, then return to the church to shower, eat, participate in a worship service and spend time with their home church groups. 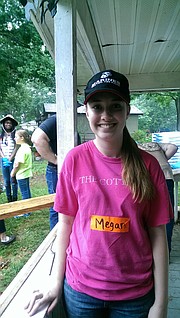 Lorton native Jeannine Purdy is with the Virginia Hills Baptist Church in Alexandria, which helped organize the camp and whose youth make up some of the participants.

“We know there are needs everywhere in our state, even in wealthy Northern Virginia, and want to be sure our youth understand that as well,” she said in an email.

Walking on to the site for the first time Monday morning, there was no mistaking work had to be done.

“You began to understand why we’re there,” said Diana Gilbert of Springfield, a chaperone with a daughter on the Impact team, “and what the need is.”

Megan Cloer of Burke recently became a member of First Baptist in Springfield after her family moved to Virginia two weeks ago from Jacksonville, Fla. She spent the morning on the roof, removing aged shingles. “It’s hard work,” she said, “but you see the difference we’re making in the homeowner’s life, serving him and serving God.”

“It’s the summer, it’s raining -- you’d think we would have a hard time getting kids to work,” said John Williams, a volunteer crew chief on the site, as he measured new floor boards with his sons Bryce and Seth. “The problem is getting them to not work, to come down off the roof. They’re ministering to the homeowner, working with him, interacting with him. The kids here are pretty awesome.”

Rising high school senior Will Lewis, of Chesterfield, helped take out the floor in the rear room. “I just like helping people in need,” he said. “It’s satisfying. And it’s great to take a break from the rest of life, to unplug.”

YOUTH PASTOR Danny Quirin of Roanoke is serving as the camp pastor for the week, delivering a sermon each night during the worship service. He’s been ministering to youth for over 30 years. The theme of the camp is “Just Because,” and his messages center around experiencing and sharing the love of God. The sentiment is meant to motivate the youth in their daily work on the job sites and in the future.

“You can’t give something you don’t have,” he said in his Monday night homily. Once you’ve experienced that love, he explained, the camp is about teaching youth to get in the habit and mentality of serving other people with love in their hearts.

When Quirin first saw the Lorton property, he thought, “Wow. Sometimes, you think truly the best thing for a house would be a match. But this house is going to be transformed. Then it will be, Wow, we did that. It’s such an awesome feeling.”