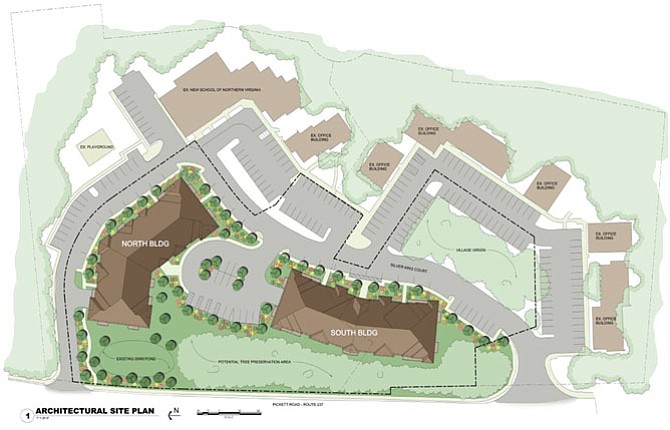 Although IDI-RJL Development LLC hoped the Fairfax City Council would green-light its condo project in June, both the Council members and local residents voiced many concerns. The applicant hopes to replace offices planned for the Mantua Professional Center with 80 condos in two, four-story buildings, but not everyone’s happy about it.

“When we bought our property next to the development, we didn’t know it would be changed from commercial to residential,” said Catherine White. “My biggest concern is the water and rain coming off two, 75-foot buildings and going into [nearby Thaiss] Park, which gets flooded now, as do the neighbors adjacent and down the hill.”

Amy Barwani, who lives near the Thaiss ballfield, said, “Seven months of the year, that hill is full of children playing. My cul-de-sac has 15 families, and we’re worried about construction traffic and our children’s safety. The water issue also needs to be addressed before this moves forward. After it rains, I’m already shoveling mud and clay from the park, from our cul-de-sac.”

Besides that, she said, “These buildings would be a tremendous eyesore for us and tower over the trees, so we’re concerned about our property values. Parking is already an issue, and people will try to park in the Mantua community.”

OUR DAILY BREAD Executive Director Lisa Whetzel said her organization values affordable housing for all income levels. She then told the Council to make its approval contingent upon the applicant contributing $372,806 to affordable housing, based on the City of Alexandria’s plan.

“With other affordable units being demolished, VOICE [Virginians Organized for Interfaith Community Engagement] wants a one-for-one replacement and an Affordable Housing Trust Fund established,” said Whetzel. Agreeing, resident Judy Fisher urged the Council to ask for “the maximum contribution from every developer.”

Jan Harrod, president of the Mantua Citizens Assn., said the condo buildings are “out of proportion to the adjacent streets in size, bulk, scale and density and will be an eyesore to us. It’s already on a 38-foot-high hillside, and there’ll be 70-foot-plus buildings. We requested a 40-foot maximum height, but received no response from the developer.”

She also wondered how tree buffering would be addressed to the east, where the condos would abut her property. And she said the project needs adequate stormwater controls so there’ll be no adverse impacts.

Allison Ingram said nearby Santayana Drive already has noise from vehicles on Pickett Road and “without the tree barrier, it’ll get even worse. And there’s no justification for a 75-foot building. It’s only four stories, and City Code only allows 60 feet maximum for five stories.”

Mantua’s Roberto Obando told the Council members the “traffic problems that’ll come with this development haven’t been adequately addressed. And the loss of property value in Mantua will reduce this project’s financial benefit to the City. Withhold approval until there’s more research and discussion and the citizens’ concerns are addressed.”

Longtime resident Bill Rakow noted that “the more surface parking you have, the more water runoff. And how do you insure that people don’t migrate from there to park in Mantua?” Regarding the building height, he asked the developer to fly a balloon so people could see just how tall the two buildings would be.

Meanwhile, Eric Fleming said stormwater already comes down his drive and he’s concerned, as well, about “the short tree line and no fencing to make it safe.”

Called to the podium to respond to all the residents’ concerns, Cecchi said, “Many of these are new comments to us. We made a presentation to Mantua months ago and only four or five residents came. And there was no formal request for a balloon-flying. We’re not bordering the Mantua community; we’re adjacent to Pickett Road. And two of the five buildings originally planned and approved would have taken out trees and green space, [too].”

As for the stormwater issue, Eric Spencer, a project consultant on that matter, told the residents, “We’re required by state, county and City code to improve the existing stormwater management.”

AFTER A BRIEF RECESS, Mayor Scott Silverthorne asked Cecchi, “Based on the residents’ comments you’ve heard this evening, do you have any positive changes to your proffers?”

However, IDI attorney David Houston replied, “Rather than commit to anything tonight, maybe we need more time to work on this.” The Council then deferred action on this issue until its Sept. 8 meeting.

“I think you’ve gotten quite a bit of new information tonight, so I encourage you to do some community outreach, hear their problems directly and see if you can address them, head on,” Silverthorne advised the applicant. “I and my colleagues would be glad to join you, if you’d like. We look forward to seeing you again in September.”