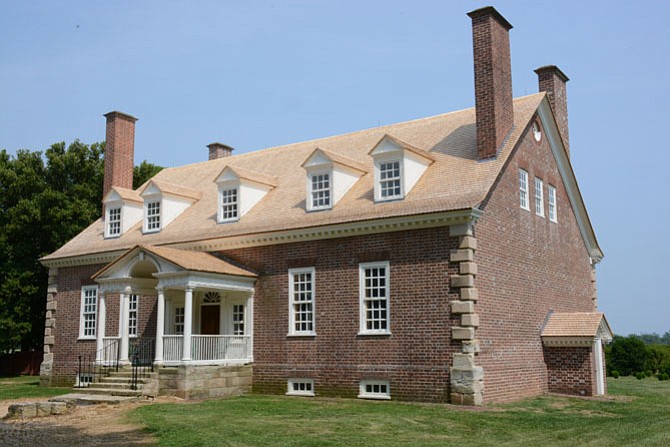 Alaskan Red Cedar shingles used in the new Gunston Hall roof came from a mill in Washington State and are similar to wooden slats George Mason would’ve had on his roof in the 18th century. Photo by Tim Peterson.

Gunston Hall’s new roof is made of tiles of Alaskan Red Cedar and is estimated to last for about 50 years.

Approaching Gunston Hall in Mason Neck, the 18th-century plantation home of George Mason, its roof appears to gleam golden in the sunlight. The heavy slate tiles that previously topped the building where Mason may well have drafted the Virginia Declaration of Rights were recently replaced — not by gold, but Alaskan Red Cedar.

The wood shingles, which came from a mill in Washington State, are much closer to what Mason would have had on his roof, according to David S. DuVal, Gunston Hall director of marketing and public relations.

The slate tiles were added in the 1930s while the structure was still privately owned. Replacing them has been part of an “ongoing preservation and stewardship plan,” DuVal said.

Gunston Hall would have sought funding for the roof, but an anonymous private donor stepped forward five years ago and offered to finance the project.

A renovation plan began a year ago, according to DuVal, with construction starting at the beginning of January this year. It was completed just a few weeks ago, in plenty of time to celebrate George Mason Day on June 13. Total cost of the project was $389,000.

“It’s putting the house back more in time,” said Gunston Hall tour guide and Lorton native Rhonda Williams. “When you come, you’re stepping back in time. It’s peaceful here, and with the new roof it keeps it in a more authentic setting.”

In time, the vibrant cedar will weather to a brown-grey, similar to the slats seen on the outbuildings surrounding the main house. The roof is estimated to last around 50 years.