Alexandria People at Work: The Hunt for the Culex Mosquito
Votes

Alexandria People at Work: The Hunt for the Culex Mosquito 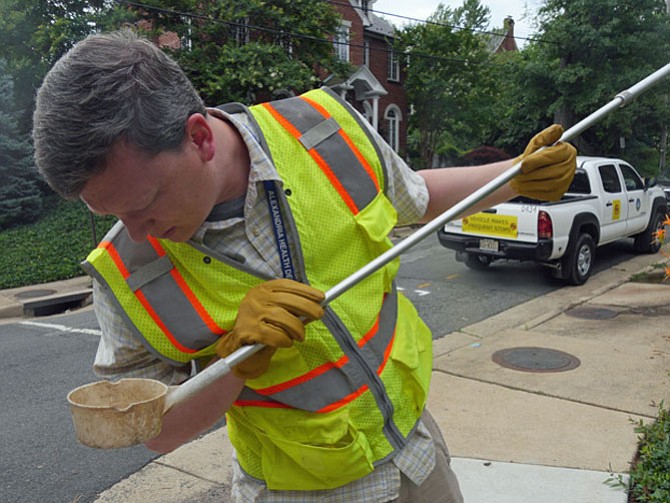 Daniel Sherwood dips out a sample and finds it full of various stages of mosquitoes, some ready to pupate into adults. Shirley Ruhe/The Connection

Daniel Sherwood’s shadow is reflected in a stagnant pool of water down a manhole filled with mosquitoes.

Daniel Sherwood poked the long-handled dipper into the manhole. "Let's see if we can get any here." He peered into the stagnant water in the dipper. "Look at this; we have all four instars in here. These rafts are filled with eggs, and each raft can have 50-100 mosquitoes. See that little guy wiggling around in there," he said. "He is getting ready to pupate. We are really concerned about the pupa. When they get to the fourth instar stage, they stop eating and start laying eggs." 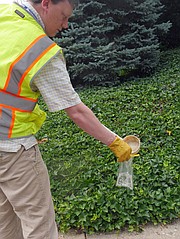 Daniel Sherwood bags the mosquitoes to take back to the lab to test for Culex mosquitoes that are the vector for West Nile virus. 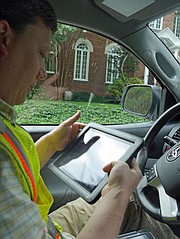 Daniel Sherwood enters the information on the mosquitoes into the “real time” computer so that it is recorded in the database and not just in his head. 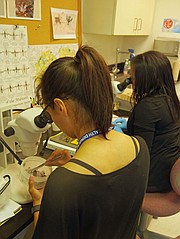 Sherwood collects the specimens in a small plastic bag to take back to the lab. He whirls the bag around itself three times to seal in the water. "It's kind of fun." Adjoining the manhole is a large yard of dense English Ivy. "That's a haven for mosquitoes — low to the ground, moist and shaded with low predation."

Sherwood is the environmental health biologist with the Vector Borne Illness Prevention program for the City of Alexandria. He starts planning for mosquito season in April and finishes up in November if necessary but May through October is considered mosquito season. On Mondays three battery-powered traps are set at each of 13 sites around Alexandria. The traps are picked up on Tuesday. On Wednesday and Thursday he and his seasonal workers sort them, speciate them and then pool them, putting the Culex mosquitoes together to test them for West Nile virus. "Culex mosquitos are the primary vector for West Nile," he said. Sherwood stares through the microscope at black specks in a petri dish and one by one pushes a pile of Culex mosquitoes to the side. They treat the sites once a month rotating by week.

"In this area there are 20 or so mosquitoes we would see. About 5-10 are very common and 3 or 4 make up about 90 percent of the population. In the beginning they all look alike. Like if you were an alien … all dogs would look alike," he said. But he adds that when you start to look at a mosquito you see that one has a short palp and one has a palp as long as the proboscis or some have abdominal banding. A good seasonal worker can start to identify them by sight in a month or so.

He said he looks ahead to what kind of mosquito season it might be based on weather, what it has been like so far this year with a cool, wet spring. A lot of water gives a lot of opportunity but on the other side in the cool weather, a mosquito uses up a lot of energy. He says they monitor for general abundance of water that leads to more mosquitoes and to interactions with the bird populations. "We aren't fortune tellers."

During the summer his team processes about 30,000 mosquitoes with 1-4,000 in the traps each week. As his truck turns the corner, he points to a pool of standing water. "We just found this the other day, and it has been treated. There are no mosquitoes in it now. We use a bacterial protein that is environmentally friendly and is not bioaccumulative. It inhibits a mosquito's ability to consume food and it dies." He walks to the edge of the pond. "At this site now we are concerned about these deep tire tracks. They have just enough water to hold mosquitoes, are hard to find and can sit for months." Returning to the truck, he records his observations in the "real time" computer system. He explains this way the sites get locked in, "not just in my head."

Although Sherwood routinely checks his regular routes, he is also actively scanning for standing water or other signs along the way such as water-loving plants like cattails. "Over there you can tell by the slope down from the road to the wooded area will be a small stream." Mosquitoes also have distinct habitats with some liking stagnant water and others a flooding situation. They rest during the day in the shade and come out at dawn or dusk. Some fly long distances and some like to feed on only reptiles and others on birds or mammals. "Only the females/suck blood. They need the protein to produce eggs."

Sherwood has been with the City of Alexandria since 2012. He came from Prince William County in its mosquito program. Before that, he says he was a college student after he got out of the Army where he was a vet tech working with police dogs. "I've always had an interest in biology. After I had a summer internship with the vector program in Alexandria, it just clicked. I could see the benefits of the program and I was providing a service." Although the general hours are 8 a.m.-5 p.m., sometimes it is 8 a.m.-7 p.m. "The person who gets bit by a bat is always 5 p.m. — guaranteed.”