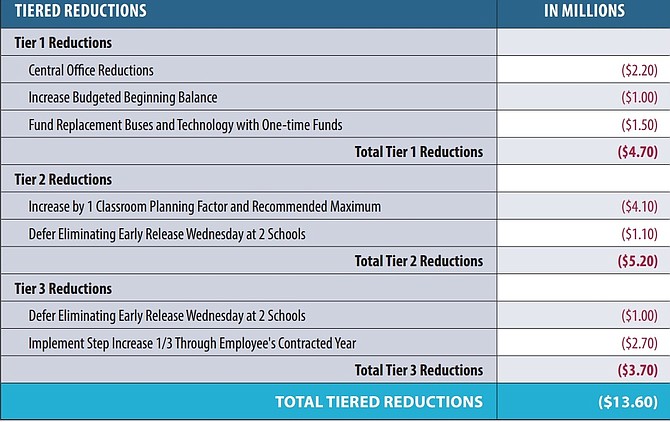 With a funding gap of $13.6 million, Arlington Public Schools (APS) Superintendent Patrick Murphy’s proposed budget comes with a few extra potential cuts. Murphy has divided these cuts into three tiers: from less drastic cuts to maintenance and materials in tier one to abandoning a plan to eliminate early release Wednesdays from four elementary schools in tier three.

The Arlington Superintendent’s Budget totals $561.1 million, roughly 48 percent of the county’s $1.16 billion budget. An increase of $21.7 million from the FY 2015 budget, or a 4 percent increase. Salary and benefits account for 78.8 percent of the total budget and 89.2 percent of the School Operating Fund.

“The additional staffing is to address increased enrollment,” said Murphy at a budget presentation on Feb. 19. APS is expecting 1,097 new students next fall, a 4.5 percent increase over this year’s 24,529 student population.

While there are no new initiatives, the superintendent’s budget does account for new “investments” for a total of $28.1 million. This includes increased instructional time with the elimination of early release Wednesdays at the four Arlington schools that have that program: Arlington Science Focus, Arlington Traditional, Long Branch and Taylor elementary schools. The early releases decrease the amount of instructional hours the students receive in relation to their peers at other elementary schools.

“[Early release Wednesdays] been around for a while,” said Frank Bellavia, an APS spokesman. “I’ve been here for nine years and it’s from before my time .... It was originally intended to give teachers extra planning time. It’s a program that was implemented at different places at different times.”

The extra time in those school days will be dedicated to the implementation of a Foreign Language in Elementary School (FLES) program. The superintendent expressed hopes that this would help APS schools address goals set in the Strategic Plan to better provide middle and high school students with world language instruction. According to the budget, the School Board places a priority on students being proficient in at least two languages before they graduate from elementary school.

Another initiative is the full step increase for all eligible APS employees at the cost of $8.1 million for an average salary increase of 2.8 percent for most eligible employees. Since the 2010 fiscal year, APS has provided a step increase every other year, and did not in FY 2015. The only salary adjustments in 2015 was a 2 percent compensation and a $500 one-time bonus for eligible employees.

Murphy’s series of tiered reductions in the budget could reduce or eliminate these initiatives entirely. The reductions are planned with the expectation that the County Board would be either unwilling or unable to finance the full $561.1 million budget.

The first tier involves reductions in the Central Office. APS currently conducts a two-day conference for 180 APS administrators with a keynote speaker, professional readings, and workshops with a total cost of up to $30,000. The Central Office reduction would decrease the expenditures for the speaker, diminish staff payment for services during the event, and eliminate professional reading materials. While listed as a Central Office reduction, the superintendent noted that this would not affect any APS staffing. The reductions to this conference is expected to save $10,000.

Other tier one reductions would have an effect on APS staffing. Library services reductions would eliminate two staff positions, replaced by 1.5 library assistant positions, who would be responsible for receiving and processing books and materials. The reduction is expected to save $24,880.

The superintendent’s budget also laid out potential cuts to materials for classrooms. This includes:

Tier One reductions would also see a reduction in funding to maintenance and equipment, including the elimination of four maintenance staff. General cuts would also impact access to materials for various school-related programs at local community centers and APS departments. Currently, APS also has a Succession Plan program that identifies and develops exceptional employees that would receive cuts to its scholarship program.

In total, Tier One reductions would save $4.7 million.

Tier Two reductions would increase APS classroom size maximums by one. The other major Tier Two reduction would be deferring the elimination of Early Release Wednesdays at two Arlington schools. While the budget does not specify which schools would be affected, two of the Arlington’s elementary schools would have less classroom time than the other schools in the county.

In total, Tier Two reductions would save a total of $5.2 million.

At Tier Three, all of the plans to eliminate Early Release Wednesdays in Arlington schools would be deferred. Tier Three would also delay implementation of the full-step increase for APS employees until one-third of the way through the contracted year, which would mean school employees would not see the increase until November of 2015. While this action would save money for FY 2016, that cost would come out of the baseline budget for FY 2017.

All of the tiered cuts, together, would entirely close the school’s $13.6 million budget gap.

Some on the County Board have expressed an understanding of the school’s position, but noted that the school might still have to face up to those potential cuts.

“I think the county and the schools need to tighten their belts further,” said County Board member John Vihstadt, “but we need to be mindful of the school’s needs, especially the skyrocketing enrollment that is continuing to surge .… Schools have laid out potential areas for reduction or delays if the county does not fund their entire gap. The schools may have to embark on some of those savings. We need to sharpen our pencils and look for additional savings.”

The school board will have a series of four work sessions throughout March and host a public hearing on March 19. The School Board will vote on approval of the budget on April 9 with final budget approval by the County Board on May 7.