My Pit’s The Pit
Votes

My Pit’s The Pit 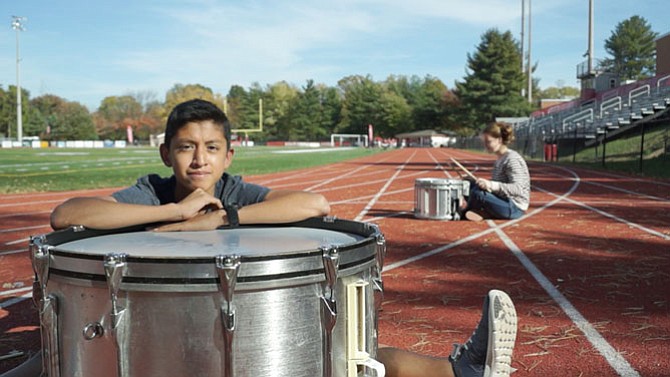 Conor Zeya with his drum named Evan, and Jade Deatherage in the background. Photo contributed

The evening will include a discussion with the filmmakers after the screenings. Five short films, between 5 and 30 minutes long, were chosen out of more than 100 submitted.

Here are the winners:

After 60 years of business, Men’s Fashion Center faces its biggest challenge; a tough economy and a gentrifying neighborhood.

About 100 people submitted films, and Josh Leong, 14, of McLean, is $500 richer for earning one of five spots in an upcoming Film Festival for a comedy film sketch about his high school marching band.

Well, no, not that either. “The pit” of the percussion section of the McLean High School marching band.

Leong and his friends are the musicians who don’t move with the band, they are the ones who play instruments that can't be lugged around, like timpani drums, marimbas, xylophones, and other odds and ends.

Snare drummers, bass drummers, "they're the prestigious ones who get to make noise and march around," said Leong.

THE PIT, they are the stationary ones, said Weise. "We try to give every percussionist some experience in the pit.”

Perhaps for their lack of movement, “The pit has a reputation of being slackers," said Leong.

“My Pit’s the Pit — McLean High School Marching Band,” is the name of Leong’s five-minute long film; actually a four-minute 58 second film that won a spot in Bethesda Urban Partnership's Film Fest 2015 to be shown in Bethesda at Imagination Stage on March 20 and 21.

Leong's is one of 100 entries that were submitted this year, the third year of the Film Fest, said Brenna O"Malley, of Bethesda Urban Partnership.

"It wasn't a surprise to me that he put something really good together," said Weise. "He's a talented student in a lot of ways."

"There is an enormous amount of talent in this area. To have students participate is great," said O'Malley.

Promotional materials say Leong's film is “a look at the unique, passionate and under-appreciated front ensemble percussion section. Each overlooked member of the Pit is instrumental in the foundational success of the band."

Leong describes it a bit differently, albeit with a sense of humor. "When we created the video, we didn't create it with festivals in mind," he said. "It's original, it's short. It was created to be a comedy."

"I was a freshman in my first season in marching band. I quickly noticed that we had a bad reputation," he said. "We're shunned and underappreciated."

Although Leong talks about his film humorously, his band director calls him a student who is always prepared, serious, "a good student in every regard."

Leong is a talented musician, said Weise; he also has aspirations to create more film. He and his "pitmates" made the film to bring unity while doing something fun.

People in the band told him, "'That's the only good thing I've seen come out of the pit,'" he said.

"It gave us a little respect, it showed our creativity."

Ten to 15 musicians play in the pit; about 160 students participate in marching band, said Weise.

"They are a fun and creative group of people," said Weise, who has been the band director for 7 years.

FILMS NEEDED to be between five minutes and 30 minutes. Leong's was 4 minutes, 58 seconds.

“I didn’t really think two seconds would make or break the acceptance.”

“That was an interesting predicament for our video,” said Leong. “I didn’t really think two seconds would make or break the acceptance.”

The judges excused the two seconds.

Filmmakers needed to be from Virginia, Maryland and Washington, D.C. Each filmmaker will discuss his or her film after the screening.

The film festival is scheduled for Friday, March 20 and Saturday, March 21 at 7 and 9 p.m. at Imagination Stage, 4908 Auburn Ave. Tickets cost $10. Visit www.bethesda.org for more information.