Cars line the street for blocks for free cake at the German bakery. 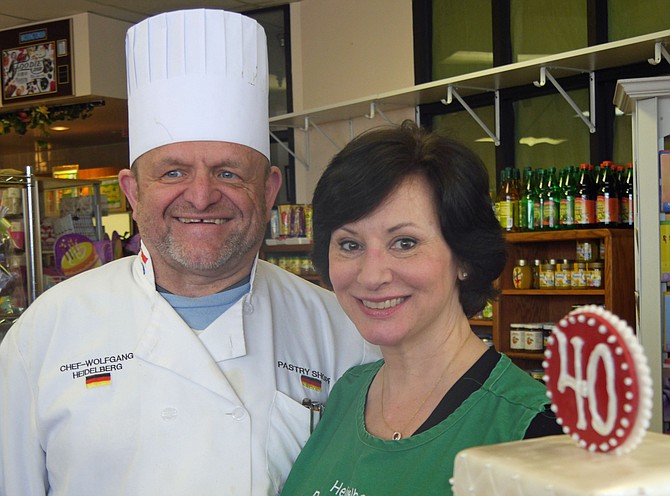 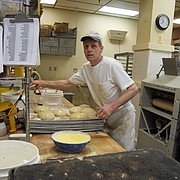 Thomas Fend makes bread for the next day at the Heidelberg Pastry Shoppe. The bread will sit and then proof for 15 or more hours before baking.

“Kids come in and want anything with sprinkles.” 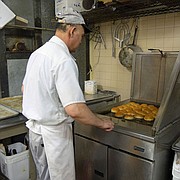 Saran Chuong flips over berliners cooking in the hot oil for several minutes and will pop them out on the counter to drain before filling with jelly. 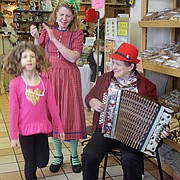 The large paddle cuts through the dough in the large aluminum bowl. “This is enough for about 100 carrot cakes,” said Wolfgang Büchler. Büchler and his wife Carla own the Heidelberg Pastry Shoppe on Lee Highway in Arlington. Büchler’s day begins in the dark at 1:30 a.m. when he arrives at the bakery to get the donuts and Danish underway for the day. “I like working when it is nice and quiet.” Next to him is another bowl with enough ingredients to make a couple of thousand shortbread cookies. He says all of their flour is ordered from Germany. “Watch out,” he said over his shoulder to Saran Chuong who is flipping over the German jelly-filled berliners in the hot oil.

Büchler points to Thomas Fend nearby who is making loaves of bread. “We produce about 110 loaves a day including 20 kinds of bread,” Büchler said with his heavy German accent. “Bread is the most difficult challenge of anything we make in the bakery. Yah,” he said. “Humidity can change everything and one minute in mixing time can make a difference in how the bread turns out. This bread is for tomorrow. It will sit, then we put it in the fridge to proof 15-20 hours.”

In the back of the bakery, a nephew, Nathan Smith, monitors small donuts automatically dropping into the vat of special melted shortening to fry before the machine arm flips them over. Cinnamon-sugar is added. “We used to do this by hand,” he said. They are making these donuts to sell for 40 cents each at Heidelberg’s special 40th anniversary celebration Saturday, March 15. Heidelberg Bakery started out in 1975 on the corner of Lee Heights shopping mall. In 1988 the Büchlers built their own bakery building on the corner of Lee Highway and N. Culpeper Street.

Büchler recalls that the first week they were in the new location he slept only one hour the entire week. “I fell asleep on a chair in front of the oven and woke up to the sound of the oven alarm.” He points to the current oven with rotating shelves that can hold 100 cakes at a time. Next to it is another oven that can hold 125 pies. “The rotation helps distribute the heat better. “ Carla Büchler likes the pretzels hot out of the oven and Wolfgang Büchler wrinkles in concentration. “I like a lot of stuff.”

He says at this time of the year they are busy making Easter cakes and breads such as hot cross buns, Easter bread, marzipan sunbathing bunnies and thousands of pieces of chocolate. Carla Büchler says that they have seen things change over the last 40 years. For a while there were a lot of families with children who would come in on Sunday for donuts or “anything with sprinkles.” The population aged, but now the large families are back again. The economy can be a factor but according to Wolfgang Büchler, “it is up here, “ he says pointing to his head. “You can sit around and talk about it, but that doesn’t do any good. You need to figure out what to do about it.” When people couldn’t afford quarter sheet cakes anymore, they made 8- inch cakes instead. And sometimes they have a game to entice people to have fun while they are there.

Wolgang Büchler is always thinking about what works and seeking to grow. “Over there is Alexander, our 33-year-old son who recently changed our coffee after a lot of experimenting.” Many of his bakers have been with him for at least 15-20 years. “I train them all, every baker runs a a different system. He says he is disciplinarian and believes the customer means everything. “I tell my bakers, the customer doesn’t care if you didn’t get much sleep last night.”

Wolfgang and Carla Büchler divide the duties with Wolfgang supervising the baking upstairs —juggling timing for the bread, heating the chocolate, baking pies, frying donuts while Carla handles the downstairs. “We don’t try to ‘mangle too much’.” Carla Büchler says she has 20-25 workers including full-time and part-time. She pays the bills, orders for retail and the deli, serves customers and answers emails. “It is so different now with credit cards and all of those emails.” Carla Büchler says that the popularity of the German bakery is partly because a lot of people used to be stationed in Germany in the military and had happy memories. Others have visited Germany. And of course there are the people of German heritage.

The bakery has been offering sandwiches since they moved to the current location. On Saturday mornings in good weather they offer sausages with the trimmings under a large umbrella stand outside the bakery. Carla Büchler says they have a German butcher in Baltimore who makes sausages and cold cuts. In about 1990 they added the “portrait cakes.”

Wolfgang Büchler said, “Back then the machine cost about $20,000 and had a big arm that screeched for 10 minutes while transferring the picture to the cake. Now the pictures are in color and the process takes just a few minutes.

Wolfgang Büchler knew he wanted to be a chef since he was five years old. He just liked it. And besides in Germany you had a choice of being a farmer, a mechanic or a butcher but “I didn’t like killing animals. And in the wintertime, it was nice and warm in the bakery.”