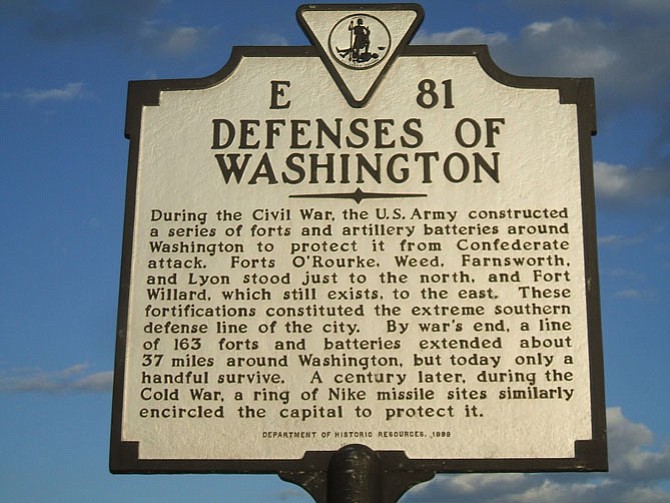 In the pedestrian area next to Richmond Highway between the Pizza Hut restaurant and the Kings Crossing Shopping Center is a Virginia Historical marker for the Union army defensive forts once in this area of Mount Vernon. All are gone except for Fort Willard, a Fairfax County park in the Belle Haven community. The largest was Fort Lyon located where the Huntington Metro Station is today.

Unmentioned in the historical marker was the presence of a large camp for Union soldiers located in the present day Spring Bank Community. The first Union soldiers to occupy this patch of land were from the 2nd Vermont Volunteers. In a book, “Army Life In Virginia, The Civil War Letters of George G. Benedict” edited by Eric Ward, there is information about a camp built on land that belonged to Spring Bank Manor in the fall of 1862.

George G. Benedict, a Vermont newspaper editor, enrolled with the 2nd Vermont Volunteers as a private and was sent to Washington D.C. The 2nd Vermont spent time at camps in D.C. and Virginia and then received orders moving them two miles south of Alexandria, Va. The soldiers christened the camp “Vermont.” It reminded them more of Vermont than Virginia as they were in a snowstorm, upon arriving, that left 5 inches of snow on Nov. 7, 1862.

The Benedict account is a detailed record about Union army life from the perspective of an enlisted man describing the daily regimen of camp life. Thinking they would be here through the winter, they built a solidly constructed camp of log structures with canvas tents serving as roof tops, makeshift stoves for heat and a mess hall, kitchen and infirmary. He mentions the sloping hillside by a stream of good water close to the Spring Bank Manor mansion. This area is part of the former Fairchild property located today behind the WalMart at Kings Crossing with Quander Brook being the stream of good water.

Soldiers from Camp Vermont assisted with the construction of the nearby forts and some were posted as sentries on the Occoquan River rotating back and forth from the camp every few days. Upwards to 5,000 soldiers were encamped at different times in this area.

The Vermont Volunteers later joined Union forces participating in numerous campaigns and battles of the Civil War. Camp Vermont was occupied throughout the war by other Union Army units from different states.

Benedict rose in rank to 2nd Lieutenant and he and others in his unit received the Medal of Honor for their role during the Battle of Gettysburg, inflicting heavy casualties on both flanks of the Confederate forces under command of General Pickett as he led his famous charge on the third day of battle.

During the Civil War, Charles Henry Quander, a slave at the Hayfield Plantation, provided food to a unit of Union soldiers from Pennsylvania assigned to Camp Vermont. According to the Quander family oral history, Henry asked the soldiers to teach him to read and write in exchange for the food. Henry may have provided the soldiers with food from a kitchen garden next to his cabin or with food from his owner's fields at risk to himself.

When the Emancipation Proclamation was signed in 1863, Dennis Weston Johnston, Henry Quander's owner, did not free his slaves. He continued to hold his slaves thinking they were unaware that they were free since they could not read. Having learned to read in exchange for the food given to the soldiers, Henry later approached his owner and declared, “I know freedom has come.” Johnston acknowledged, “Yes Henry, freedom has come, take your freedom and tell the others they may also take their freedom”.

Henry Quander was freed; however, he continued to work for Johnston for wages. He saved his money and began purchasing property from the widow, Elizabeth Downey, owner of Spring Bank Manor. He purchased land in parcels, until he acquired 88 acres that were once part of Spring Bank Manor. On that land he developed a milk dairy and produce farm selling milk in the Mount Vernon District and the city of Alexandria as well as produce in the old Alexandria City Market.

The Fairfax County Park Authority continues to not take transfer ownership of the property donated by Elizabeth Fairchild in 2009. Spring Bank seeks your support to urge and aid the Mount Vernon supervisor to convince the Fairfax County Park Authority to take this donated land under their control for future master planning as they have done for other communities in the Mount Vernon District. Please show support by viewing and signing our online petition at http://www.ipetitions.com/petition/petition-to-the-mount-vernon-supervisor-to